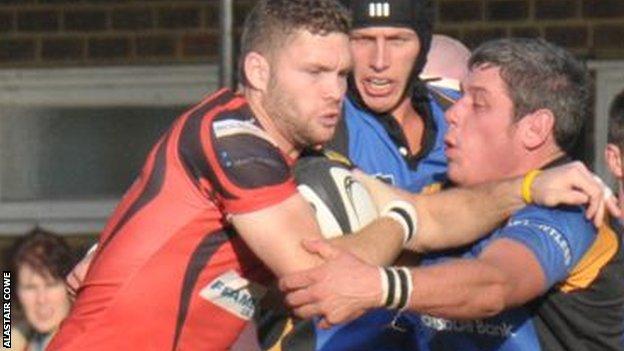 Redruth boss Adrian Edwards has praised the club's young players after their 51-23 win at bottom side Barking.

The Reds were missing five senior players as they ran in seven tries to maintain their perfect start to the National Two South season.

"I was quite nervous about this game because they're desperate for a win and we had a number of senior players out," Edwards told BBC Radio Cornwall.

"But the young lads that came in stepped up and did a really good job."

First-half tries from Sam Parsons, Tom Notman, Richard Brown, Chris Fuca and a penalty try, as well as nine points from the boot of Paul Thirlby, saw the Reds go in at half-time 34-9 ahead.

Tom Duncan scored two tries after the break in between one for Barking's Charles Baffour-Awuah.

Fuca got his second with 12 minutes to go before Michael Anderson got a late consolation try for Barking.

"If you want to be involved in the XV at Redruth now you've got to perform week in, week out, both on the field and off the field in training as well," Edwards added.

"A lot of these guys are young lads who've come up through the Devon and Cornwall League and they're doing a great job.

"With five senior players to come back what do I do?"