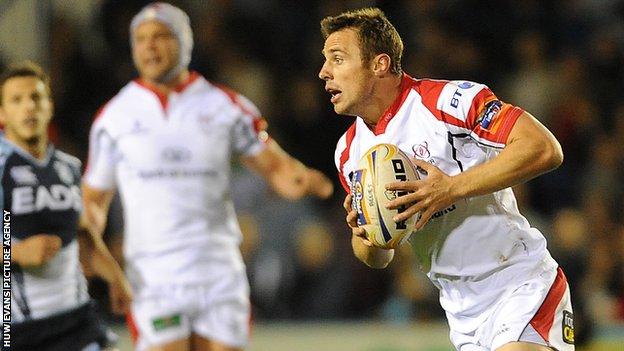 Ulster paid a fitting tribute to Nevin Spence with a seven try victory over Cardiff Blues to maintain their 100% start in the Pro12.

Harry Robinson scored a second half try for the Blues, who slumped to a second home defeat of the season.

A minute's silence preceded kick-off in memory of Spence, who died with his father and brother in a farm accident.

Former Ospreys wing Bowe was handed his first start by Ulster following his return to the province while the Blues also included a player starting for the first time with Jason Tovey selected at fly-half.

The Blues were led out by Bradley Davies, who was making his 100th appearance for the Welsh region.

And it was the home side who got the game's first points with Tovey slotting over a straightforward penalty with barely two minutes gone.

A marauding run by Tom James created an opportunity for the Blues but the bounce of the ball fell unkindly for Sam Warburton, who fumbled with the line in sight.

The Blues' promising start saw Tovey adding a second penalty to extend their lead to 6-0 after nine minutes.

But that gap was closed three minutes later when fly-half Paddy Jackson secured Ulster's first points with a simple penalty.

That galvanised Ulster and their scrum put the Blues under sustained pressure. John Afoa was held up inches from the line before the inevitable opening try came on 16 minutes.

Allen crossed from a tapped free-kick despite the best efforts of Dafydd Hewitt with Jackson adding the extras.

But Allen was to pay the price for his try-scoring efforts as he limped off the field to be replaced by Paddy Wallace.

Tovey added a third penalty for the Blues but the visitors continued to press and they were rewarded with a second try through the impressive Williams.

The New Zealander crashed over through a wall of Blues defenders to score the second try and Jackson's successful conversion put his side two scores clear at 17-9.

The Blues were dealt a blow four minutes before interval when Tovey was carried off after he twisted his leg in a tackle.

The home side began the second half brightly and a period of pressure was rewarded when replacement Gareth Davies's penalty went over with the aid of the post.

But Ulster's response was swift with Jackson and full-back Payne sending Bowe flying past James to the corner.

Jackson's perfect kicking record ended as he missed the conversion and the failed with a long range penalty attempt minutes later.

Payne added a further try for the visitors with a solo effort to secure the bonus point before Bowe went over for another touchdown.

The Blues hit back with a try for Robinson, converted from wide out by replacement fly-half Davies but they could do little to halt a rampant Ulster.

Williams touched down in the corner for his second of the evening and Ulster's sixth Jackson to add the extras.

Trimble completed victory with the seventh try, converted by Jackson, as Ulster returned to the top of the Pro 12 table.