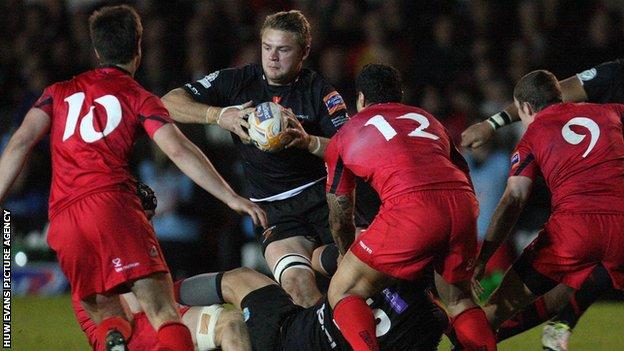 An injury to Dan Lydiate was the only setback as the Dragons ended a run of three defeats against Edinburgh.

Phil Price grabbed the only home try on the stroke of half time while Edinburgh wings Tom Brown and Tim Visser crossed in either half.

The game started on a worrying note for the home side as Wales flanker Lydiate went down injured while defending the first Edinburgh attack.

Lydiate had to carried off by the medical staff and clearly unable to put any weight on his left leg and the Dragons later confirmed he had suffered a broken and dislocated ankle .

Edinburgh wasted several promising attacks with handling errors but made no mistake in the 12th minute.

Both sides were trying to play a high tempo game but failing to create clear chances.

It was the boot of Prydie which got the scoreboard moving as he slotted over four penalties while Harry Leonard fired two wide at the other end.

The lack of flow in the game wasn't helped yellow cards for Dragons hooker Steve Jones and Edinburgh lock Sean Cox, seemingly paying the price for a dangerous tackle by colleague Robert McAlpine.

But prop Price showed some unexpected skills as he took over lineout throwing duties and promptly took a return tap to hare 30 metres down the touchline making it 17-7 at the break.

The flurry of sin-binnings continued into the second half as Ross Rennie was dispatched for a technical offence with Prydie knocking over his fifth penalty.

The Dragons then moved three scores clear in the 48th minute, when fly-half Steffan Jones banged over a snap drop goal from 40 metres leaving the visitors with a mountain to climb.

But they pulled a try back just short of the hour mark when Visser outpaced the defence to an astute Leonard grubber, only for Jones to land his second drop goal in the next Dragons attack.

Jones popped over yet another effort in the 75th minute as the game ended in the inevitable rash of replacements with the home side cruising to victory,

Cox was denied a last minute Edinburgh score by a crossing offence in the build-up.