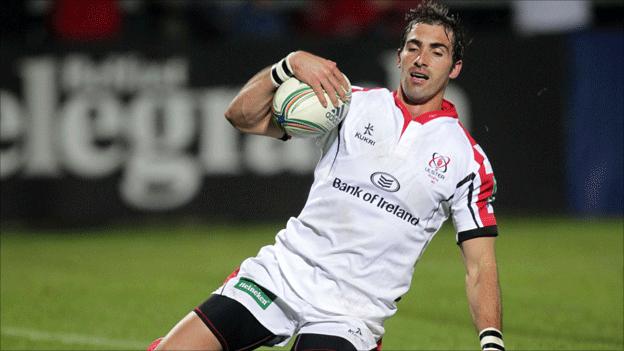 Any notion that Ulster would struggle to cope with the increased weight of expectation caused by last year's unexpected Heineken Cup final appearance was quickly dispelled in front of a packed house at Ravenhill.

The Irish province ran in four tries to open this season's campaign with a convincing 41-17 bonus-point win over Castres.

Prior to the Pool Four opener, Ulster's excellent home record in the competition and their promising start to the Pro12 series provided cause for optimism while their opponents' recent results in the northern hemisphere's premier club competition did not bode well for the three-times French champions.

The visitors won just one of their six Heineken Cup group matches last season, and recorded two victories and four defeats in the previous tournament.

In fact, a semi-final appearance in 2002 represented the only occasion in which Castres had made it past the group stage.

Tickets sales were predictably brisk in advance of the game, indicating that Mark Anscombe's charges are continuing to capture the public imagination, building on the surge of interest generated by last year's European odyssey.

While the extent of last year's final defeat by Leinster may have been a disappointment, the thrilling victories over Munster and Edinburgh which preceded it were still fresh in the memory of the expectant Ulster fans as they entered the ground.

From early evening, supporters spilled out of minibuses, taxis and cars and made their way to the stadium in anticipation of another special night of top-flight Friday night club rugby in Belfast.

The most eager among the 11,451 crowd booked the prime places on the Terrace and Promenade early on while others took advantage of the wide variety of options on offer from the food and drink stalls.

Even the news that Ireland flanker Stephen Ferris had failed a pre-match fitness test failed to dampen the mood of optimism.

An array of flags, scarves, hats and shirts created a sea of red and white and a group of musical fans even tried to drum up further support with the help of a range of percussion instruments.

Club mascot 'Sparky' was out and about early to hand out souvenirs to young supporters and encourage the capacity crowd to find their voices as the players were put through their pre-match paces.

The volume increased as each Ulster player's name was cheered when read out by the announcer and the team completed their now customary lap around the pitch before kick-off.

A more intimidating, if good humoured, reception was reserved for the away side, save for a generous round of applause afforded to former Ravenhill favourite Pedrie Wannenburg, now plying his trade with Castres.

The atmosphere reached fever pitch as a crescendo of noise greeted the players onto the pitch and Ulster coach Mark Anscombe took his seat in the stand for his first taste of Heineken Cup action.

If last year's runners-up were feeling any pressure early on, it didn't show as Andrew Trimble went over in the corner to become Ulster's top try scorer in the history of the competition with 19 to his name.

"The Ulster players all look comfortable playing at this level - there is a composure and consistency about their play and they look set to build on the momentum generated by last year's run to the final," enthused BBC Radio Ulster summariser Ryan Constable as the home side assumed control.

Some trademark piercing runs by returning hero Tommy Bowe were greeted with enthusiastic roars of approval, but the winger was upstaged soon after as eventual man-of-the-match Paul Marshall produced a fine piece of individual brilliance to keep the scoreboard ticking over.

A combination of enterprising attacking flair and stubborn defence, which have been the hallmarks of Ulster's early season successes, helped them to a deserved 23-10 half-time lead, and then Marshall further vindicated his selection by scoring his second try.

"There is a sense of anticipation every time Ulster go forward as the fans want to see how they are going to attempt to break through the Castres line," Constable told Radio Ulster listeners.

"The scrum has laid the foundations for Ulster in the Heineken Cup of late and they have continued that dominance tonight," added the ex-Australian centre.

Meanwhile fellow BBC pundit Maurice Field hinted at some added incentive for the Ulster players who will have the initials 'NS' printed on their shirts for the remainder of the season in memory of former team-mate Nevin Spence, who died, along with his father and brother in a farming accident last month.

"I sense that the Ulster players want to achieve something really special in Nevin's memory," he said.

The Ulster juggernaut was temporarily halted in the second half as Castres crossed the line for their second try of the game, but a rapturously received late touchdown from substitute Ruan Pienaar secured a precious five-point return for the home outfit.

So Ulster fire an early warning shot across the bows of their rivals and continue the process of becoming accustomed to being one of the fancied runners rather than perennial underdogs trying to emerge from the shadow of Irish provincial rivals Leinster and Munster.

The former should again prove the major stumbling block to their hopes of going one better this time round, with French trio Clermont Auvergne, Toulon and Toulouse also tipped to go the distance.

A first tentative step in the right direction towards the Dublin 2013 final, but some fine tuning still required ahead of a potentially tricky test away to Glasgow next weekend.

And with uncertainty surrounding the future of the Heineken Cup beyond the 2013-14 season, nights like this against top European opposition under the Ravenhill lights may have to be cherished even more.