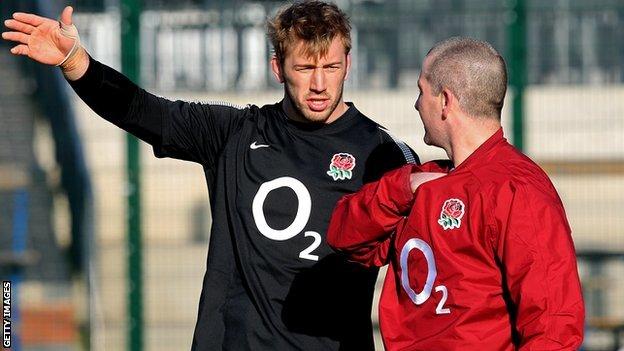 Chris Robshaw is not guaranteed to be England captain for the autumn internationals, head coach Stuart Lancaster has revealed.

The flanker gained credit for the way he led England during the Six Nations and summer tour to South Africa.

"We haven't decided on the captain yet," Lancaster told BBC Sport.

He plans to assess the form and fitness of players when the squad meets at the end of October, but admitted Robshaw had "done a fantastic job".

Under the leadership of Harlequins skipper Robshaw, England won four of their five matches in the Six Nations, finishing second in the table.

They then lost their summer series against South Africa 2-0, but Northampton hooker Dylan Hartley captained the side for the last Test, a 14-14 draw in Port Elizabeth, because Robshaw had broken his thumb.

Lancaster thinks it is "too early" to make a decision on the captaincy but added Robshaw would be a strong contender, as would Hartley.

"If you look at the performance of the third Test, while Chris was missed on the field, Dylan did a fantastic job captaining the side," said Lancaster.

"We got a performance out of the team in what was a challenging situation to make sure we finished the tour strongly, on the back of a long hard season for English rugby. That was credit to Dylan and also the rest of the players who played in that team."

Lancaster added: "I wouldn't say the captaincy is overplayed - being England captain is a big job - but a strong leadership group is equally important. If you've got a fantastic captain but you haven't got someone who can run the game from 10 or run a line-out, you can forget it."

Lancaster, appointed as the permanent head coach in March and with a contract until the 2015 World Cup, is confident his work off the pitch will be rewarded with continued improvement.

"We've got a good group and we see the autumn internationals as a key staging point," said the former Leeds Carnegie director of rugby.