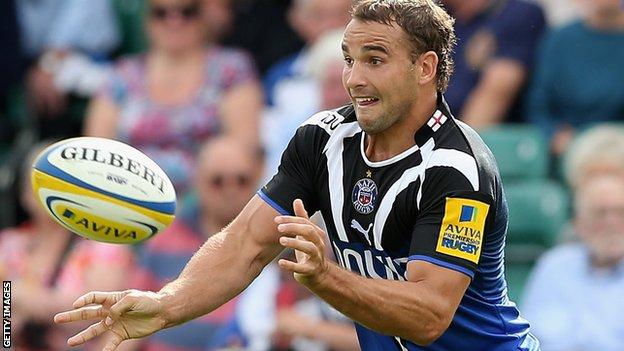 Bath fly-half Olly Barkley will join French Top 14 side Racing Metro 92 at the end of the month.

He is contracted at the Rec until the end of the season but will move to Paris as a 'medical joker' to provide injury cover at number 10.

He will be available to play in both of Bath's next two fixtures - away to London Irish and at home to Sale.

The 30-year-old Barkley has made 160 Premiership appearances for the club and has 23 England caps.

I will be forever a Bath boy but this, for me, was simply the opportunity of a lifetime

Bar a season-long spell at Gloucester in 2008-09, Barkley has spent his entire career at the Rec. He has been in fine form this term, not missing a kick in their opening two victories of the season and landing three penalties in their defeat by Northampton.

But the opportunity of playing European rugby for a prospering top-flight side has lured him abroad.

Bath failed to qualify for the Heineken Cup for this season, while Racing are in a group with Saracens, Munster and Edinburgh.

"I will be forever a Bath boy but this, for me, was simply the opportunity of a lifetime and one I just couldn't ignore," he said.

"I will miss the club always, and I wish all of my mates here the very best. I believe they are a special group with special coaches, and I hope they achieve everything they desire."

"Given his early season form, along with injuries to Stephen Donald and Tom Heathcote, some people may be surprised to see Bath let Barkley go.

"However he is only a couple of months from his 31st birthday and the club may feel they have got the best from him.

"Bath do have Sam Vesty as cover and Donald is close to a return so the gap, if not the player, should be filled relatively easily.

"Barkley, or OB1 as he's known to some fans, has been a great servant at the club and will no doubt be missed by the Rec faithful."

Barkley later added on Twitter: "I leave with a heavy heart to take on what will be a big challenge but one that I am going to try and grab with both hands."

Head coach Gary Gold added: "Barks is a great bloke and a top player. I could not have been more impressed with both his attitude and his incredibly professional approach since I arrived at the club.

"As a senior player, he could not have worked harder or been more welcoming to us as a group of coaches, but every now and then an offer lands on the table that a bloke just can't refuse.

"We are sorry to see him go, but he goes with our blessing. He will always be welcome here."

Meanwhile, Bath have announced the signing of hooker Brett Sharman on a short-term loan as injury cover for Rob Webber.

The Premiership club said the decision to terminate his deal was due to a long-standing knee injury, which had kept him sidelined since January.

His exit came two weeks after he posted an offensive tweet about Olympic gold medallist Mo Farah on Twitter.