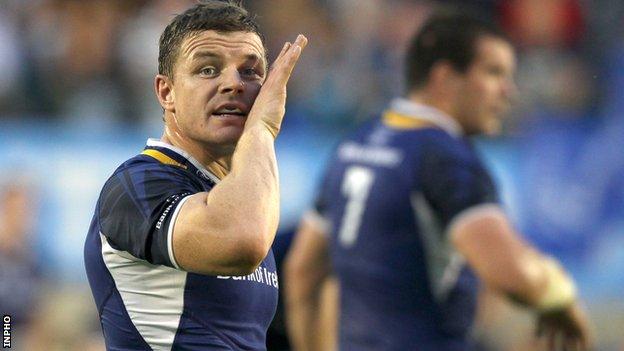 Robert Barbieri's score helped the home side lead 8-0 before O'Driscoll ran in a 44th-minute try after his own break.

Kris Burton's conversion appeared to have won the game but Sexton landed the decisive drop goal in injury-time.

Treviso, two weeks after their opening win over champions the Ospreys, started brightly with Alberto di Bernardo kicking them into an early lead.

Several of Leinster's big-name players were making their first starts of the campaign with Sexton, Eoin Reddan, Jamie Heaslip and Shane Jennings among those joining O'Driscoll in making their seasonal debuts.

The home side then exploited the sin-binning of Leinster flanker Kevin McLaughlin as Barbieri powered over for a try after a quickly-taken penalty.

Sexton cut into Treviso's lead with a penalty just before half-time but the home side led by five points at the interval.

O'Driscoll ran from midfield to cross the line unopposed four minutes after the break with Sexton's conversion putting the visitors ahead.

A further Sexton penalty increased Leinster's lead to five and while Burton replied in kind, a further three points from the Ireland fly-half restored the away team's five-point advantage with six minutes of normal time left.

However, Treviso then looked to have snatched a dramatic win as replacement scrum-half Semenzato crossed the line with three minutes remaining with Burton knocking over the conversion to put the Italians two points up.

But there was still time for Sexton to slot a winning drop goal for the relieved Heineken Cup champions.