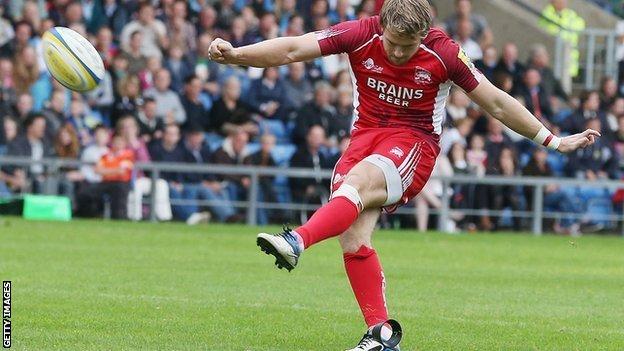 London Welsh secured their first ever victory in the Premiership with a gutsy display against Exeter.

Welsh were then awarded a penalty try before Nick Scott went over and Gordon Ross's penalty put them 15-14 ahead.

Richard Baxter put Chiefs back in front but, after an exchange of penalties, Ed Jackson's try cut the gap to one and Seb Jewell landed a winning conversion.

Jewell's last-gasp kick capped a remarkable fightback by the Exiles, who are in their maiden Premiership campaign after promotion from the Championship last season, and ensured they recorded their first ever points in the competition.

They had found themselves trailing 14-0 within 12 minutes.

Sireli Naqelevuki then powered his way past three Welsh players before sending Jess clear for their second try and Mieres duly coverted for the second time.

The Welsh pack hauled their side back into the game with a rolling maul which left Exeter back-pedalling frantically.

Referee Dave Pearson penalised the visitors but played advantage and when Exeter illegally tried to halt the Welsh drive once again he duly awarded the hosts a penalty try, which Ross converted.

Scott then intercepted Chris Whitehead's pass inside his own 22 before outpacing his pursuers to touch down in the corner.

Ross failed with his attempt to add the extras but gave Welsh a half-time lead with his first successful penalty attempt of the afternoon, having missed one just five minutes before.

Baxter drove over for Exeter's third try, again converted by Mieres, soon after the restart to put Chiefs back in front but Ross reduced the deficit with another three-pointer.

"Two weeks seems a very long time ago since we played Leicester here and were found wanting.

"After having such a tough time against Leicester and at Harlequins, we've learned a lot about ourselves.

"We are delighted not just with the result but the performance was so much better.

"We didn't fold. We kept in there and took our opportunities. We showed a lot of character to come back."

"We won't be calling a crisis meeting on Monday or calling players in for extra training.

"I think today's more about congratulating London Welsh than worrying about what we did wrong.

"You have to be a decent side to come through the Championship play-off structure and the Premiership is a great place to learn.

"Players and teams get better and London Welsh are doing that.

"Am I disappointed not to win? Of course I am. We like to win every game of Premiership rugby.

"I'm probably more disappointed with the way we played, some of the mistakes we made and the way some senior players gave away soft penalties and made wrong decisions."