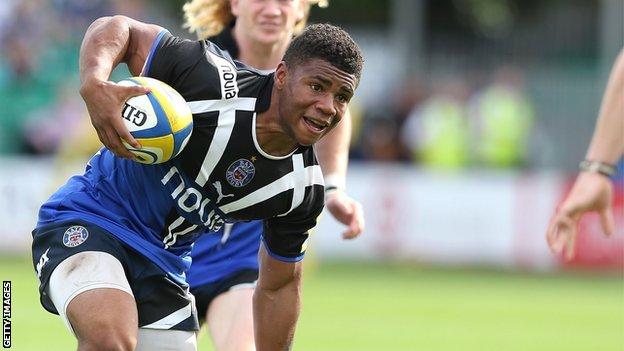 - What effect Mike Catt's appointment will have an England's attack

- Whether Scotland are on the verge of better times

If you have a question for Jerry, on any topic, post it in the comments section at the bottom of the page. He will answer as many as possible but not every question submitted can be used. This week's answers appear below.

Hi Jerry, the last two Premiership weeks have seen two dazzling young runners in Kyle Eastmond and Christian Wade shine, and references to Jason Robinson have been made. I like them both but if you were England boss Stuart Lancaster which one would you be looking at closest? GM Massingbird

Hi GM, Wasps flyer Wade is in pole position as far as these two are concerned because he's already been on a tour and has continued his good form from last season. It has to be pleasing for Eastmond and Bath that he's finally playing and producing performances after injury wrecked last season - his first after he switched from rugby league. There's no stopping any player who has an impact so if Eastmond can keep on scoring, making breaks and setting up tries he will get on Lancaster's radar.

There are always a couple of leftfield [surprising] choices when the Lions squad gets announced: what do you think of Christian Wade's chances of getting a spot for the 2013 tour to Australia? I think Lions boss Warren Gatland might see a bit of Shane Williams in him. Hass8

Hi Hass8, given all the wing talent currently playing for the four home nations, I think it will be very difficult for Wade to get on the tour. England are touring Argentina next summer and it will do him good to be on that. If he plays outstandingly well he might just make it onto the Lions tour but it would be a very leftfield selection at the moment.

What effect will Mike Catt's appointment as England's attacking skills coach have? Will we see different players being selected, particularly in the centres? Sean

Hi Sean, it's going to be difficult for Catty to have a big impact straight away because the overall style and tactics will be decided by Lancaster. I hope Catt does have some influence over the attack because England need to be set free. Andy Farrell will be a great motivator but any side he's been involved with so far in union has been conservative and pragmatic in its playing structures. I hope Catt can have his voice heard: if it is then England should develop into a better passing and attacking team.

Hi Jerry, I'm a Gloucester fan and have had a bet with a Wasps fan that whichever team finishes lower in the Premiership at the end of the season, their supporter has to run 10k in the other team's jersey. Both are teams in transition and appear to be scoring freely, but who's going to win that bet? wills82

Hi Wills82, that was a brave bet by the Wasps fan considering where they were last season but fair play, he's keeping the faith. Personally I would be telling your mate to get in some training for the 10k because he'll be running in a Gloucester shirt.

I think the good run from Edinburgh in the Heineken Cup, plus the high finish of Glasgow in the Pro 12, will have helped the Scottish players believe they are more than capable of doing well with the national team

Last weekend saw another high-scoring round in the Premiership. Is this mainly down to an attitude change, good weather, change in rules, a greater difference between the top and bottom sides or some other reason? OnlyJoeQuin

Hi OnlyJoeQuin, the start of every season sees a lot of attacking rugby. Part of the reason is because the players have been cooped up all summer training hard and can't wait to get going. The weather also plays a part and I think the new use it or lose it rule - you can't leave a ball at the base of a ruck for more than five seconds now - has helped speed up the game and led to more action.

After watching the Edinburgh v Cardiff Blues Pro12 game on Friday, I couldn't help but be impressed with Edinburgh's drive to win and close out the game. When you couple this with Scotland's hard-fought win against Australia during the summer, does this show that the Scottish players are finally learning how to close out games and how important could this be in a crucial Six Nations next year? Conor_J_S

Hi Jerry, you were less than complimentary about Scotland in your replies last week and while I agree we have been frustratingly poor, surely some credit is due for going undefeated in the Southern Hemisphere in June. Admittedly we had easier Tests, but we still achieved what the Welsh couldn't and won on Australian soil. With the players we have, I can see light at the end of the tunnel. Bullitjw

Hi Conor_J_S and Bullitjw, for the last couple of seasons I've been looking forward to a winning Scotland - a team moving from a side with potential to one that actually does the job and wins matches. I think the good run from Edinburgh in the Heineken Cup, plus the high finish of Glasgow in the Pro12, will have helped the Scottish players believe they are more than capable of doing well with the national team. They need to believe more and stop making unforced errors in the national jersey.

I think that the Rugby Championship has well and truly disproved the Wallabies' spurious claims to having "the best attacking backline in the world", especially considering that the tries they did manage this week in their win over South Africa were scored by forwards. With all of the players that Gatland will be able to choose from, how can the Lions not win the series against what is apparently such a lacklustre team? Azaer

Hi Azaer, nine months and a full season is a long time in rugby and I wouldn't expect Australia to be performing so badly then. At this current time I agree Australia look a shadow of the team that won last year's Tri-Nations. They have had a few injuries and captains seem to be falling like flies, but a full-strength Aussie side will give the Lions a very tough series.