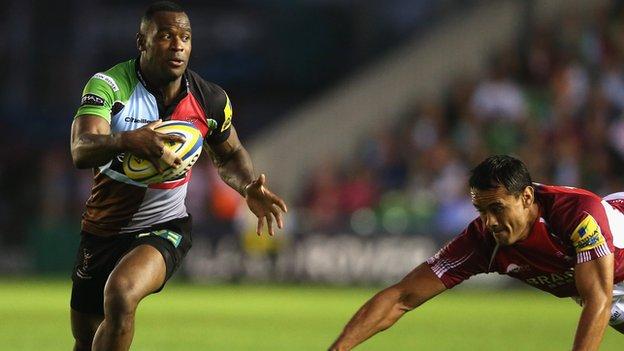 Champions Harlequins made short work of Premiership new boys London Welsh as they breezed to a six-try victory.

Fresh from their amazing opening-day comeback at Wasps, this proved a lot more comfortable at The Stoop.

Centre George Lowe was also on the scoresheet, along with subsitute Ben Botica, with Nick Evans kicking five conversions, while Gordon Ross landed a first-half penalty for the Exiles.

New Zealand fly-half Evans, who is considering his options for next season as clubs in Japan and France trying to tempt him away from The Stoop, was again named man of the match - a week on from proving the architect of victory against Wasps.

Quins' first Premiership match at The Stoop since claiming the title in May was their 27th match-up against their former neighbours, the last time the two clubs having met being back in 2006 in a National One clash when Welsh lost 28-17.

Harlequins were forced to stage the game on a Friday night because Lady Gaga is taking up a two-night residency at Twickenham, just over the A316, this weekend.

But that was particularly tough on Welsh, who were forced to face the reigning champions just five days after their 38-13 top flight debut defeat against Leicester.

"We are satisfied. We held our discipline very well at times when it could have got quite fractious.

"I was delighted with the way we started, with the directness and the tempo we would want.

"You can't score six tries to nil and not be relatively happy. To get off to two bonus-point wins is a nice way to start the season."

"Everyone at Harlequins wants Nick Evans and hopefully he will still be here. But we will do our talking behind the scenes."

"Tonight wasn't a good day in the office. We knew it would be a tough game but we were keen to perform better than we did tonight.

"The disappointment was not losing but not justifying how well we can play. The boys are devastated at the moment.

"We suffered a bit from Harlequins' poor start last week. They came hard at us.

"We have got boys who are learning to deal with the speed and the intensity of the Premiership. We are hoping to adjust as quickly as we can."