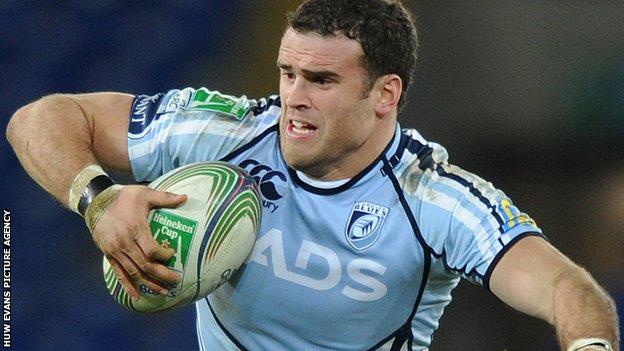 Lions centre Jamie Roberts is set to return from knee surgery ahead of schedule to give Wales a boost ahead of their autumn Test programme.

Roberts was due to return in October following the injury that forced him out of Wales' June tour to Australia.

But the Blues have announced the 2009 British and Irish Lion will be fit to face Newport Gwent Dragons in the Pro12 League on 15 September.

A week later they travel to local rivals the Dragons with 25-year-old Roberts, who has 44 caps, in contention to play.

A successful return would set Roberts up to challenge for a return to the Wales midfield in time for the November Tests.

Osprey Ashley Beck overtook Williams in the pecking order for the second and third Tests while Beck's team-mate Andrew Bishop also made the tour, facing ACT Brumbies in a midweek clash.

And Gavin Henson could make his mark once he has overcome the cheekbone fracture that has halted his progress at London Welsh.

Roberts originally picked up a knee problem in the Heineken Cup win over Racing Metro in November 2011.

He spent a further spell on the sidelines after suffering a knee injury during the Blues' 28-9 Pro12 win over Newport Gwent Dragons a month later.

He returned for Wales' opening game of the Six Nations, the 23-21 win over Ireland in Dublin in February, and played in the following four games as Warren Gatland's side secured the Grand Slam.