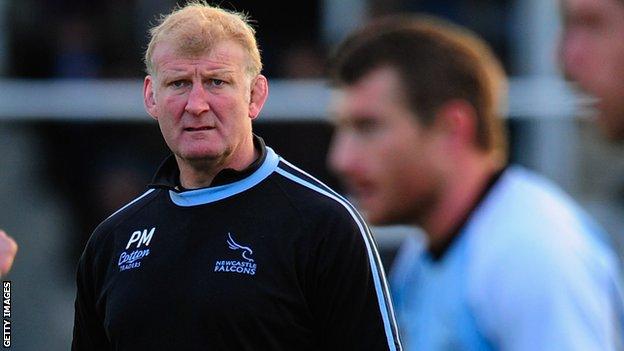 Moriarty, 47, has previously coached at Newcastle Falcons and Scarlets, where he worked alongside new Cherry and Whites head coach Nigel Davies.

"We worked together when we won the Celtic League a few years ago," Davies told BBC Gloucestershire.

"He's a hard man and demands respect. You need someone like that to make sure the players are on top of things."

Former Swansea coach Moriarty, who earned 21 caps for his country during his playing career, ended his six year association with Scarlets in 2009 and was appointed assistant to former team-mate Alun Tait at Falcons in May 2010.

He survived a backroom reshuffle last season, in which Tait was replaced by current Bath coach Gary Gold, but opted to join Davies' regime after Newcastle were relegated from the Premiership.

Davies continued: "He's had a mixed time at Newcastle but it's been a good experience for him to work in the Premiership.

"He's got a good feel for the league and that's invaluable."

Moriarty will work alongside forwards coach Carl Hogg, who was in temporary charge at Gloucester last season following Bryan Redpath's resignation, and centre Mike Tindall, who will take on a player-coach role.

Davies confirmed he is also looking to bring in a new scrum coach - a role that was previously held by John Brain, who passed away suddenly in May.

"John did a fantastic job there and we want to continue the work he's done," added Davies.

"We're looking at some people who worked with John, who have picked up his philosophies and ideas, and we'll be making an announcement in the next few weeks."