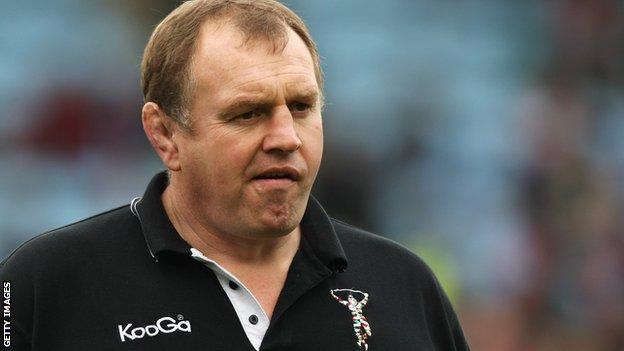 Newcastle will not appeal against the decision to award London Welsh promotion to the Premiership, which saw Falcons relegated to the Championship.

The Rugby Football Union had ruled the Exiles had not achieved the criteria for promotion after beating Cornish Pirates in the Championship play-off.

But Welsh won their appeal to ensure Falcons, who finished bottom of the Premiership, were relegated.

Falcons' first fixture will be against Bristol on Saturday, 1 September.

In March, former Harlequins boss Dean Richards was appointed director of rugby at Falcons for next season, but will now preside over a Championship side.

In a statement, the Falcons said: "We are now looking forward to an exciting new era under the guidance of incoming director of rugby Dean Richards."

Falcons finished one point adrift of Wasps at the bottom of the Premiership table but Welsh's failure to meet eligibility criteria connected with their tenure at Oxford's Kassam Stadium, where they intend to play their home fixtures, looked likely to spare Newcastle the drop.

But at an independent appeal panel the Exiles argued successfully that the RFU's criteria contravened EU and UK competition laws, which the panel decreed to be of greater significance.

After the ruling, RFU chief executive officer Ian Ritchie said there would be a review of the way clubs are assessed for promotion to the Premiership.