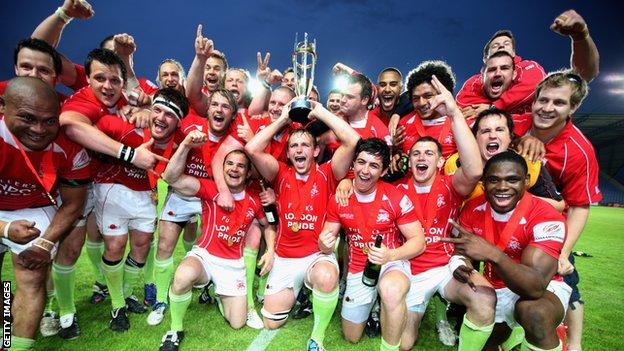 London Welsh will play in the Premiership after winning their appeal against a Rugby Football Union ruling barring them from England's top flight.

Last month, the RFU ruled the Exiles had not achieved the criteria needed to earn promotion from the Championship.

The appeal panel agreed with the club's argument that the criteria itself contravened EU and UK competition laws.

Newcastle Falcons will now be relegated to the Championship after finishing bottom of the Premiership last season.

London Welsh learned that they would be barred from the Premiership on the day of the first leg of their Championship play-off final but it did not deter them from going on to a 66-41 aggregate victory.

The club then announced it would appeal against the RFU's ruling that stipulated that Welsh had not qualified for promotion because they did not have primacy of tenure at Oxford's Kassam Stadium - where they intend to play their home fixtures.

That point was upheld by the panel, and indeed conceded by Welsh at the appeal, but the issue of competition law was decreed to be of greater significance.

The ruling prompted the RFU's chief executive officer Ian Ritchie to announce a review of how clubs are judged for promotion to the Premiership.

"We will now instigate a full review of the minimum standards criteria, working within the Professional Game Board, with the aim of ensuring all stakeholders are agreed on the process going forward," he said.

"The RFU considers this matter closed which will now enable all clubs to continue their planning for the 2012-13 season."

In a statement, London Welsh added: "The fundamental strength of our case was based not only on overwhelming legal merits, including in particular anti-competition grounds, but also on the fairness and justice of rewarding through promotion the team winning on the pitch."

"It is therefore not only a victory for London Welsh, its players, coaching staff and all its supporters but also for sport in general and the game of rugby union in particular."

Exiles chairman Bleddyn Phillips was delighted with the result and was positive about sharing the Kassam Stadium next season.

"Obviously we're delighted at the result by the appeal panel and we're very much looking forward to playing Premiership rugby," he told BBC Oxford.

"We have a very good relationship with Oxford United. I think that if there are two professional teams who want to and are willing to work together, then we will be able to very amicably resolve our plans for next season.

Newcastle argued delays in making arrangements to play in Oxford should prevent London Welsh from being promoted but the independent panel of James Dingemans QC, Ian Mill QC and Tim Ward QC rejected this argument.

Falcons also released a statement following the verdict which said: "We are extremely disappointed with the decision and the representations witnessed at the appeal hearing and we will leave our options open as to where we go from here.

"We do not underestimate the competitiveness and challenges we face in the Championship but under the tutelage of Dean Richards we will have one, and only one goal - to win.

"Dean has been in this situation with Harlequins and he understands what it takes to navigate through the Championship, whilst putting together a team that will be successful with immediate effect on our return to the Premiership."

London Welsh, who have not featured in the Premiership before, will discover who they face on the opening day of next season when the fixtures are released on Wednesday, 4 July.