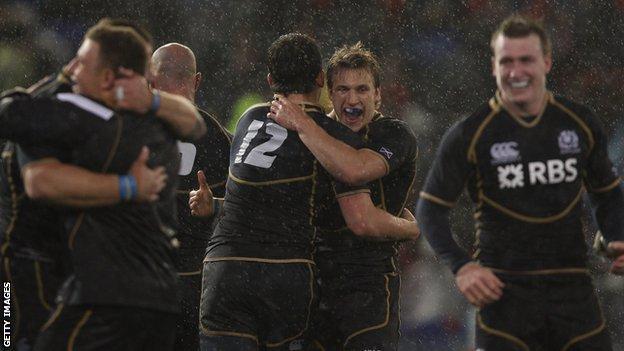 "With unity, and support from the whole nation, there is no reason we can't achieve those goals."

Scotland lost all of last season's Six Nations matches and failed to progress from the group stage at World Cup 2011.

However, Andy Robinson's side have since climbed up to ninth in the world rankings after summer tour wins over Australia, Fiji and Samoa.

Dodson will spell out his plan at Saturday's annual general meeting, where he will pledge further support for Edinburgh and Glasgow, insisting that all member clubs stand to benefit from continued success of the professional sides.

Edinburgh reached the semi-finals of this year's Heineken Cup, while Glasgow made the RaboDirect Pro12 play-offs for the second time in three years.

And 22 of the 30-man squad on Scotland's successful summer tour play for either Glasgow or Edinburgh.

"We are making real progress in revitalising the game of rugby in Scotland," said Dodson.

"Since I joined Scottish Rugby I've said I want to place much greater focus on making the pro clubs as successful as we can.

"By better aligning our professional sides with clubs sides around the country we will be able to support and nurture the grassroots and the top tier of the game.

"I firmly believe that by doing that, we will create a virtuous circle, which benefits every club and player in the country.

Scotland's best World Cup showing was fourth place in 1991 and their last Grand Slam came in the previous year, when they won the Five Nations competition.

A five-year strategic plan released in 2007 aimed for a minimum requirement of quarter-final places at the last two World Cups.

It also called for an increased Six Nations win rate of 40% up from 25% but Robinson has won just two of the 15 matches he has overseen in the tournament.

The AGM also marks the departure of Ian McLauchlan from his role as president, with Alan Lawson, 15-times capped for Scotland at scrum-half, taking over.

Dodson will report that Scottish Rugby has a surplus of £1.6m, with turnover increasing by £3.1m over the previous year.

Meanwhile, Dodson, will join John Jeffrey in representing Scotland on the International Rugby Board.