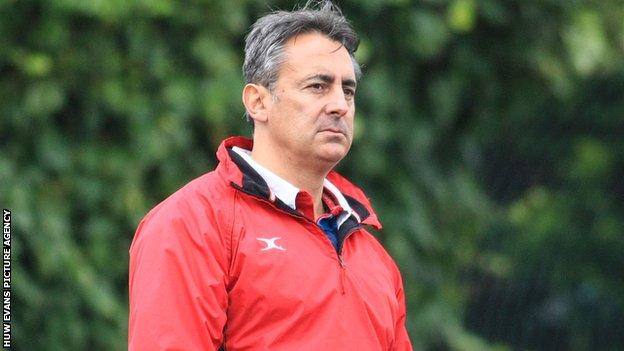 New Gloucester director of rugby Nigel Davies has assured former employers the Scarlets he will not be poaching any of their star players.

Davies, 47, has signed a three-year deal with the Aviva Premiership club.

While at the Scarlets he was credited for developing star Wales players such as wing George North and centre Jonathan Davies.

"I won't be looking at any of the coaches or any of the players [from the Scarlets]," Nigel Davies insisted.

"It's the last thing I would do is cut across anything that has been done at the Scarlets.

"I just wouldn't do that - that's not within my nature.

"Because I'd like to think I have left on reasonably good terms. That's the last thing I will be doing."

Davies admitted that leaving the Scarlets, where he has been head coach since 2008, was a difficult move but one he would have been looking to make eventually after spending all his playing and coaching career in Wales.

"It was a very tough decision [to leave the Scarlets]," said the 29-times capped Wales centre, who has been replaced as Scarlets head coach by Simon Easterby.

"But I've always felt that at some stage, having played and coached in Wales for 28 years, I'd need to challenge myself differently.

"I certainly wouldn't have moved to any club, but Gloucester I believe represents a lot of the culture and values I'm used to from a Scarlets point of view.

"It's probably a good time to join them because they had a bit of a difficult season last year.

"It's a huge challenge for me. I'm out of my comfort zone.

"It was a difficult time to leave the Scarlets. We were on an upward curve. But I leave there, I believe, with the Scarlets in good shape in terms of what the squad look like.

"I'm sure the new coaching group will take that forward. [Simon Easterby] is an excellent appointment. I was quite clear that Simon was the right man for the job."

Davies revealed that he is attempting to set up a similar environment at Gloucester to that at the Scarlets, in a bid to stop players being lured away by big-money offers.

"It is obvious there is a lot of talent leaving Wales - financial issues were a big part of that," Davies added.

"But the one thing we did at the Scarlets was trying to and create an environment where people wanted to stay and be part of. It 's not all about money.

"That's what I will be trying to do at Gloucester. I will want to make this a place where people want to come and play, and the players we have got want to stay, regardless of the financial implications."