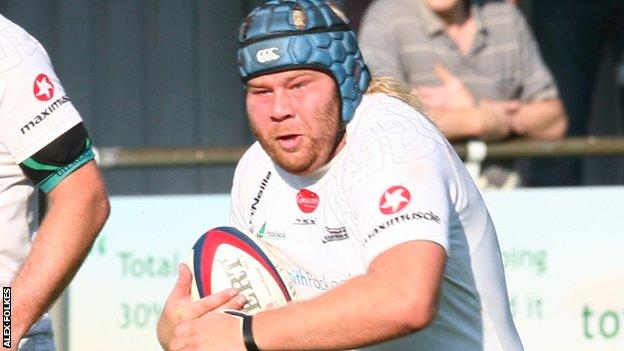 Launceston have secured the services of influential prop Tim Mathias for another season.

The 31-year-old former Plymouth Albion front-row will play for the Cornish All Blacks for a fourth season after agreeing a new deal at Polson Bridge.

The club has also signed up scrum-half Richard Friend from Barnstaple.

"It's massive to get the experience of Tim back in the side," head coach Cliff Rainsford said of Mathias, who joined from Mounts Bay in 2009.

"He'll play a big part again this year. He has played a good level of rugby all his career so he'll be one of the big players in the team," Rainsford added to BBC Sport.

He has played 55 times for the Cornish All Blacks having spent three separate spells at Plymouth Albion between 2001 and 2008.

Scrum-half Friend is the first of two number nines that Rainsford hopes to bring to Polson Bridge.

Friend was with the club for the first part of last season but could not dislodge dual-registered Exeter Chiefs youngster James Lightfoot-Brown, who has now joined the England Sevens squad.

"He brings a lot of pace and fire to the side, he's a very tenacious player," Rainsford added.

"I liked what he did last year but with the squad we had he didn't feature and he wanted to get game. He will feature heavily this year."

Rainsford also hopes to have a second scrum-half signed by the end of the week to give competition for a key place in his side.

"I am aiming to have two scrum halves of equal ability.

"It'll then really be down to them and how they show themselves as to which one gets to start."