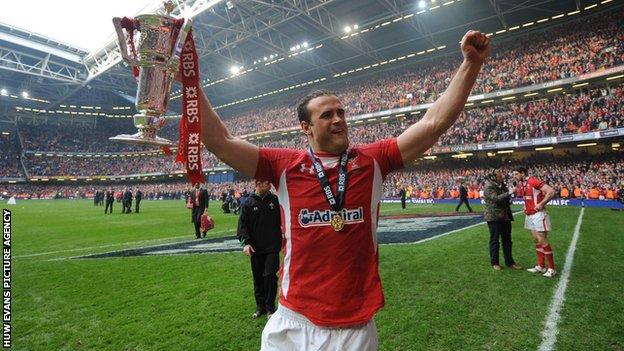 Wales centre Jamie Roberts hopes to return from knee surgery to be fit for their four-match autumn Test series.

The British and Irish Lions star wants to return for club Cardiff Blues in October ahead of Wales' autumn opener against Argentina on 10 November.

Roberts suffered a recurrence of a knee injury during the Blues' Pro12 defeat at Glasgow in March and later underwent reconstructive surgery.

"I am hopefully looking at getting back by September and October," he said.

"That is the target but you never know with these injuries - it could be sooner or later. I have been working hard with the rehab, so it's fingers crossed.

"I have done 11 weeks rehab now and I probably have another 12 to 13 weeks to go. It all depends about what happens when I start running, which will be in two weeks."

Roberts missed the disappointing end of the Blues' season before being ruled out of Wales's three-Test tour of Australia as he was forced to have the major knee operation after the Six Nations.

The 25-year-old played a key role in Wales's 2012 Grand Slam campaign, winning his second Six Nations title in four years, but had surgery on the anterior cruciate ligament in his left knee after aggravating his persistent problem.

Roberts, who has won 44 caps, expects to be sidelined for up to seven months in total and hopes for some regional rugby action before the Grand Slam champions welcome four southern hemisphere nations to Cardiff.

Wales host Argentina, Samoa and world champions New Zealand at the Millennium Stadium in November before the autumn finale against Australia on 1 December.

Roberts admits it was tough watching Wales suffer a three-Test series whitewash in Australia this summer.

The Aussies needed late kicks to win the second and third Tests as Wales suffered their narrowest losses down under since 1978.

"It has been hard watching, it has been heartbreaking especially when they have come that close," said Roberts.

"I think they deserved a win and that's what makes it so hard.

"The boys have played well and people have put in some really good performances. Go back a while and nobody would have given us hope of going within a point of Australia away from home.

"The fact we were so close is really encouraging and at the same time frustrating. I'm sure the guys will be gutted about not taking a scalp out there but it shows the improvement.

"It's just about the final step and hopefully we can do that in the autumn."