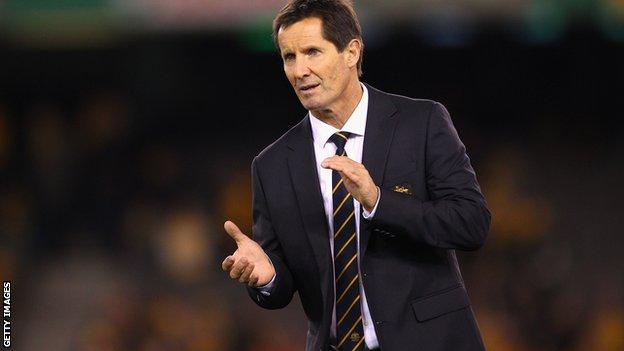 Robbie Deans has warned his Australia side and native New Zealand that Wales will be "lying in wait" and "capable" of beating both teams in the autumn.

meant a 3-0 whitewash down under but an aggregate of only 11 points separated the Grand Slam winners and Tri-Nations champions.

The Welsh have still not beaten the Wallabies in Australia since 1969.

But Aussie coach Deans said: "Wales are a world-class side. They're capable of beating any side in the world."

But Wales have not taken the scalp of a Tri Nations super-power for 14 games since beating Australia in Cardiff in November 2008.

While the Welsh have not defeated the mighty All Blacks since 1953 they beat the Aussies in the autumn following their two previous Grand Slam campaigns in 2005 and 2008.

Wallabies chief Deans, a former New Zealand international, believes Wales have the potential to upset the southern hemisphere giants - boosted by a possible return of from knee surgery.

Wales led going into the latter stages of both the second and third Tests in Australia but Rob Howley's men were denied memorable victories as the Wallabies punished Wales' indiscipline with late penalties.

The Welsh were confident of recording just a third ever win over a Tri-Nations team in the southern hemisphere this season so Deans is wary of a Wales backlash when Australia visit for the return fixture in December.

"They have a capacity to play," said Deans.

"They have an ability to keep going for the full 80 minutes and they have threats all across the ground.

"By the time we get over there at the end of the year they will be refreshed and lying in wait not only for us, but also the All Blacks.

"I think they have a good opportunity there this year."

Wales have lost all five of their matches against Australia since meeting Deans's men at the in October 2011.

"They put a lot of pressure on our line-out," added Australia skipper David Pocock.

"It was hard to get any sort of momentum from the set-piece and we saw how good their defensive system is."