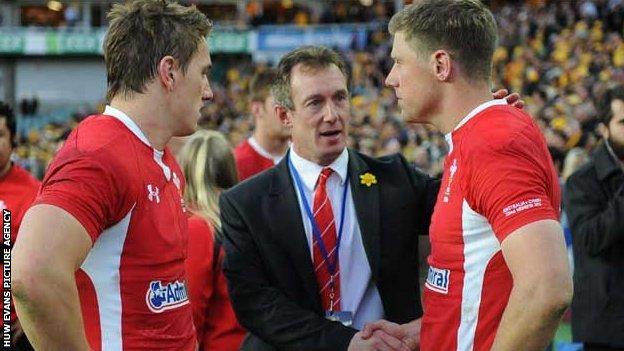 Rob Howley insists Wales don't want "taps on the back" for being gallant losers following their 3-0 series whitewash in Australia.

Caretaker head coach Howley was unhappy with his side's composure after Wales had led going into the finl 10 minutes.

"We will not hide from the 3-0 whitewash," said Howley.

"The respect we've had over here in Australia has been great but we don't want any taps on the back, this team is better than that.

"I played in many Welsh teams that got so close and yet so far, and this team want to win and we have been very very close."

Leigh Halfpenny's fourth successful penalty, following his conversion of Ryan Jones's 61st-minute try, gave Wales a 19-17 lead going into the final 10 minutes of the third and final Test at the Allianz Stadium.

But Wales were penalised at the breakdown - one of 14 penalties the tourists gave away during the game - with five minutes remaining.

And Australian fly-half Berrick Barnes kicked his fifth penalty of the match to extend a winning home run over Wales that stretches back to 1969.

"The disappointment is in the last 10 minutes as we've gone into the lead and didn't take the opportunity when it arose," bemoaned Howley, whose Wales side lost their seventh successive game against the Wallabies.

"We played some good rugby, we defended well but when moments present themselves to go in the lead and after that we weren't composed enough - and when you are playing against Australia you don't get away with those moments."

Wales suffered late disappointment in when Australia snatched victory from the jaws of defeat in added-time when Mike Harris capitalised on Welsh indiscipline.

And history repeated itself in Sydney although Barnes' late kick was well before the hooter.

But Howley insisted: "There are a lot of good ingredients from what has happened in the last three weeks.

"It is a new experience for some of these players to play in a three-Test series and the need for repeat ability to bounce back week in and week out which Australia do in the Tri-Nations.

"There are moments which we could have controlled better. We gave away field position too easily, especially in the first half but we created a lot of opportunities and our scrum was once again outstanding."

Flanker Dan Lydiate was "absolutely gutted" Wales failed to hold on in Sydney.

"We're getting closer but it was our last chance and it wasn't good enough," said the Dragons back-rower.

"There were too many errors on our part but credit to the Aussies, they're a good team. These games are won and lost by one or two points but we'll get there and we'll look forward to the autumn series back at our place."