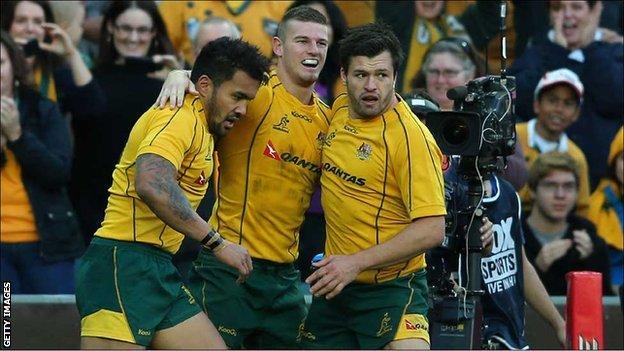 Australia completed a series whitewash over Wales as they punished indiscipline by the Grand Slam winners to edge a narrow third Test in Sydney.

The reliable Berrick Barnes capitalised on Wales errors as the fly-half kicked 15 points to extend Welsh hurt against the Wallabies in Australia to 43 years.

Ryan Jones's try powered Wales into a 14-12 lead on the hour before Australia hit back swiftly through Rob Horne.

Leigh Halfpenny's penalty put Wales 19-17 up but a fifth from Barnes won it.

The visitors were penalised at the breakdown again with five minutes remaining and for the second consecutive week, an Australian boot broke Welsh hearts to seal a 3-0 series whitewash.

Wales' one-point reverse against the Tri-Nations champions is their narrowest losing margin in Australia but the tourists, who have only beaten the Wallabies once in their own back yard, felt this was a series where they could end their southern hemisphere hoodoo.

But ill-discipline gifted Australia cheap points and that proved the downfall of a Wales side that have now lost their last seven games against the two-time world champions.

Barnes and Halfpenny traded penalties in a first-half war of attrition but Wales' penalty count of eight before the interval spoke volumes about their Achilles heel.

Wales also lost their inspirational captain Sam Warburton - who had looked in excellent form - just before the half-hour clutching his troublesome shoulder but replacement open-side Justin Tipuric continued to impress.

The visitors could have gone in at half-time level but Rhys Priestland skewed a 40-metre drop-goal well wide.

Wales lost another talisman at the break as prop Gethin Jenkins failed to return and was replaced by Paul James.

Halfpenny almost tied the scores after 53 minutes, but the superb Wales full-back missed his only kick of the series as his shot from just inside his own half bounced off the upright after Australia were penalised for wheeling a scrum.

Wales, though, gained a sight of the Australian line when after a Kurtley Beale chip over the top, George North ran the ball back from deep inside his 22 and linked with Alex Cuthbert, who in turn offloaded to Priestland.

The Wales fly-half kicked the ball into the corner and Tipuric's pace forced Beale to touch down over his own try-line.

Wales dominated a succession of scrums but failed to earn the penalty try they wanted.

But their continued pressure was rewarded when Jones, in for injured number eight Toby Faletau, crashed over under the posts following strong charges from Mike Phillips and Cuthbert.

Halfpenny fired over the conversion but Horne hit back within a matter of minutes, after the Wallabies created an easy overlap.

The recalled Beale rampaged into the Wales half to feed Digby Ioane but when the first surge was halted, the hosts took advantage of the overlap as centre Horne scored in his second successive Test.

Barnes missed the conversion and Halfpenny took full advantage with his fourth successful penalty with 10 minutes left to set-up a nail-biting finale.

Wales thought their chance of history might have come when replacement James Hook kicked the ball up the right touchline. He won the foot-race but agonisingly for Wales he ball bounced into touch.

But Barnes, Australia's fourth-choice number 10, continued his stranglehold on Wales as his penalty extended their poor record to just two wins over a Tri-Nations super-power in their last 40 attempts.