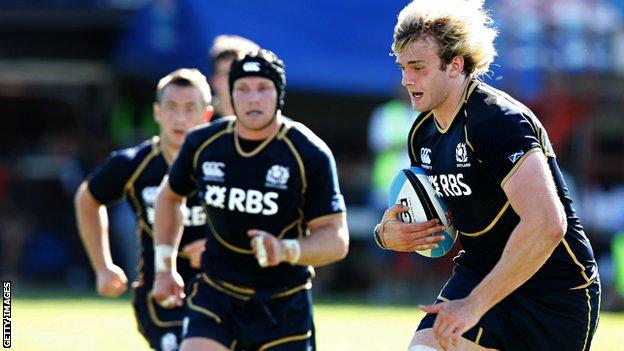 Flanker Rob Harley marked his debut with a stoppage-time try as Scotland beat Samoa in Apia.

In a tough, bruising encounter, the Scots once again showed resilience to claim victory for head coach Andy Robinson, who had come under pressure after clean sweep of defeats in the Six Nations.

The home side started the better but there was little continuity of possession for either side.

Scotland had to adopt a scrambling defence at times to keep the Samoans at bay with the influential Pisi causing havoc in the visitors' ranks with his accurate cross-kicking.

The tourists however played well at the breakdown and turned the ball over on numerous occasions in the early exchanges.

Fifteen minutes passed before Pisi opened with a drop goal but Scotland were quick to respond.

Inside centre Matt Scott's midfield break set up good field position and the Scots moved the ball left for Ansbro to claim a try in the corner after a Richie Gray lunge.

Laidlaw added the two points before Pisi added a penalty to make the score 7-6 to Scotland at the turnaround.

There was an exchange of penalties early in the second half to make it 10-9 in Scotland's favour as Pisi and Laidlaw maintained their accuracy.

However, Scotland then lost a scrum against the head and Paul Williams fed Pisi to run in unopposed and make it 16-10 to the hosts.

Reminiscent of last weekend's win in Fiji, Scotland were awarded a penalty in the 70th minute and opted for the five-metre scrum. This time however, they were unable to make a dent in the Samoan scrummaging.

The visitors looked to have used up all their chances before experienced scrum-half Mike Blair delivered a delayed pass to substitute Harley, whose angled run took him through a gap in the Samoan defence.

And Laidlaw kicked the Scots to victory with the conversion.