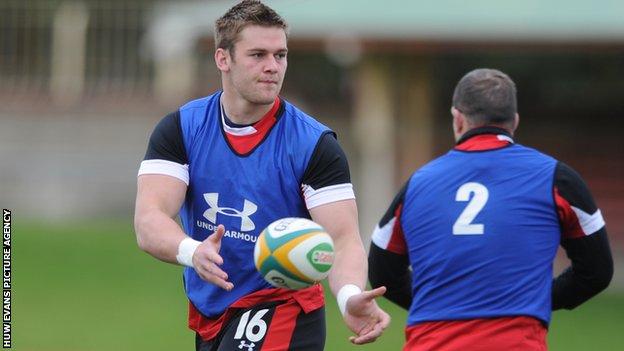 Dan Lydiate has revealed Wales are determined to win the respect of their hosts Australia in the final Test in Sydney on Saturday.

The reigning Grand Slam champions play their third and final Test against the Wallabies on Saturday.

Wales lost the two previous Tests in Brisbane and Melbourne.

"If you come down here and lose, you are losers and the only way you get respect here is by winning," said Dragons back-row Lydiate.

Wales were beaten 27-19 in the first Test and then denied by a last-minute penalty in last week's 25-23 second Test defeat.

Lydiate, who played in the two games, is determined to make sure Wales avoid a whitewash against the Tri-Nations champions.

The flanker has called for Wales to finish the season on a high and to show the quality which saw them crowned 2012 Six Nations champions.

"We can finish the season with our last game being a win and that would mean a lot to the boys, especially here on their home soil."

Robert Howley, Wales' caretaker coach, has named an unchanged starting line-up for the third Test at the Allianz Stadium.

He has given a vote of confidence to the side that led 23-22 with minutes to go before replacement Mike Harris snatched victory for Australia with the last kick of the game.

Lydiate, who will have a troublesome ankle injury investigated when he returns home from the tour, admits the manner of the Melbourne defeat was hard to take.

But the Newport Gwent Dragons flanker is adamant the hunger to record a first victory on Australian soil since 1969 is as strong as ever.

"We had a couple of days off to reflect on the game and it was a tough pill to swallow, losing in the dying minutes of the game," said Lydiate.

"But we have a massive opportunity this week to put it right and finally win in the southern hemisphere. The boys are really hungry for that.

"We had great success in the Six Nations and we came here full of confidence, expecting to have the three Tests to our name.

"It hasn't gone that way. We were close last week but we still lost. Now we have a chance to pull one back, even though we have lost the series."

Australia coach Robbie Deans has made just two changes in personnel to his starting side, recalling full-back Kurtley Beale and starting Sitaleki Timani at lock in place of Rob Simmons.

Adam Ashley-Cooper moves to the right wing to accommodate Beale, with Cooper Vuna axed from the squad.