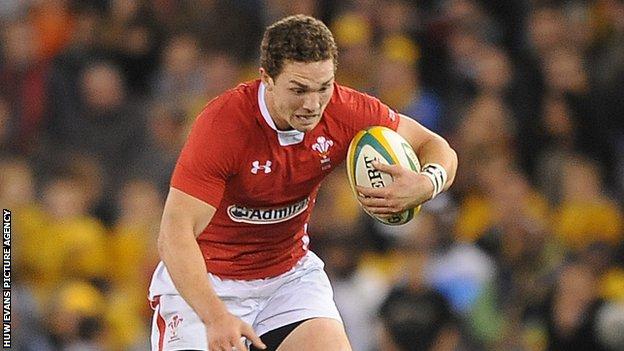 George North says a win over Australia on Saturday would be a fitting way for Wales to justify their new rugby ranking of fourth in the world.

Wales have moved above England despite losing the first two Tests in Australia 27-19 and 25-23.

"We have done enough to earn respect down here by pushing them so close in two games now," said Wales wing North.

"To get that next level of respect and be part of this top-four tier teams we need to take a scalp here."

Wales' fourth place is critical as the draw for the 2015 World Cup takes place later in 2012.

If Wales can hold on to fourth it would mean they would avoid the big southern hemisphere three of Australia, New Zealand and South Africa in the pool stages.

But with the difference between Wales and England, who play South Africa on Saturday, currently just 0.05 of a point, the nations could swap places again depending on Saturday's results.

Wales were on the brink of levelling the three-Test series with the Wallabies as they led 23-22 in Melbourne before replacement Mike Harris landed a penalty goal with the last kick of the match.

An North, who scored one of Wales' two tries in that match, admitted it was a defeat that devastated the Wales camp.

"The boys were bit upset on Saturday, Sunday, Monday," he said.

"It's hard to lose that way. We have come across that way against Ireland in the Six Nations. We know you live by the sword and you die by the sword.

"We've had good few couple of days to lick our wounds and get over it. Looking at training over the last couple of days the boys are looking forward to the game on Saturday now.

"Saturday is going to be a great opportunity for us to push hard and one last bang and finish on a high.

"It's not a series win but to win down here [for the first time] in 40 years is something to take home with you. The fact we have gone up the world rankings as well."

A win would end a run of four defeats on the trot since the Rugby World Cup Bronze Match in October 2011.

"I think I know their boys [Australia] better than my friends now," joked North.

"We have played them a lot this year. We want to finish on a high and season and hopefully we won't see them for a few years.

"This game is going to be something different. The forwards are going to be more physical and the backs can enjoy some more ball.

"We need to be a bit more clinical. We have to clean everything up for the full 80 minutes."