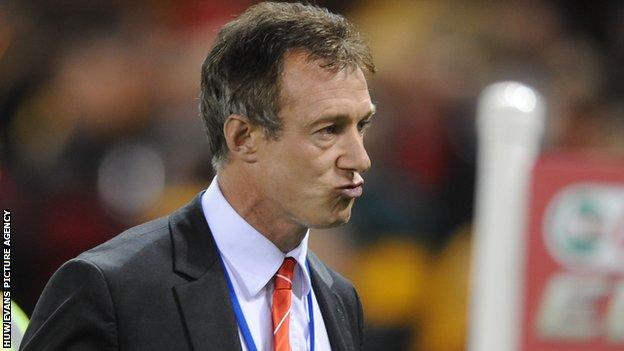 Caretaker coach Rob Howley has told his Wales players they must improve their discipline and composure in the final Test against Australia on Saturday.

An unchanged Wales side are attempting to win their first match on Australian soil for 43 years.

The Welsh side go into the third Test 2-0 down having narrowly lost 25-23 in Melbourne last weekend.

"It's moments of ill-discipline and moments of composure at line-out which we need to improve on," said Howley.

In the second Test Wales were leading 23-22 going into the final seconds. Outside-half Rhys Preistand was criticised for kicking the ball back to Australia.

And from a line-out Wales were penalised for collapsing a maul allowing Australia replacement Mike Harris to kick the winning penalty.

But despite the loss Wales have kept faith with the same starting line-up. The only change is on the replacements bench where hooker Richard Hibbard, who was responsible for giving away the late penalty, is dropped for Ken Owens.

"I haven't got a problem with Rhys Priestland kicking the ball," revealed Howley.

"The fact when Rhys kicked it Adam Ashley-Cooper [Australia full-back] was six metres inside his own 22 and the way our defence had been throughout that game we backed ourselves and we back our players to make those sort of decisions.

"We asked Australia to attack from 70-odd metres unfortunately the events that happened post that Rhys Priestland kick were difficult to comprehend."

But Howley said the management had no hesitation in keeping faith with the starting line-up from the second Test.

"We were leading for 71 minutes out of the 80 and it just shows why this side has been selected again," he said.

"[We have an] opportunity... in front of us on Saturday in terms of getting over that hurdle of [taking] a sourthern hemisphere scalp.

"The players are highly motivated.

"We must have done something right to get fourth in rugby world positioning and in terms of Rugby World Cup qualification it is a huge boost and we need to stay there.

"And I think that gives us added incentive for this week's game."