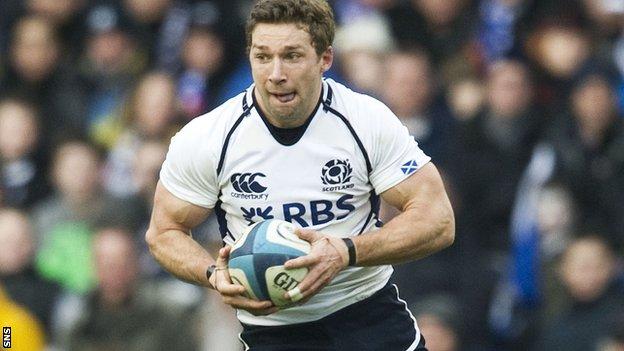 Scotland make three changes for the final match of their summer tour against Samoa on Saturday.

Flanker Richie Vernon replaces John Barclay, who has been released from the squad in order to arrange his wedding.

Chris Cusiter starts in place of Mike Blair at scrum-half and winger Sean Lamont takes over from Max Evans.

Euan Murray, Alasdair Strokosch and Nick de Luca are nursing knocks but are expected to be fit for the weekend clash in Apia.

Andy Robinson's side are aiming for a summer clean sweep after wins over Australia and Fiji.

I think we need Sean's firepower. We're looking for him to step up and ball carry hard through the Samoan line.

"They are very much like an English side. They are strong in the set-piece and hard in the contact area.

"They will try to batter and bully us in the tackle area, with their ball carrying, so we will need to be strong defensively.

"We will also have to be accurate in our clear-outs because they win a lot of turnovers.

"They have flair as well with the ability to step - they have two or three very good steppers, who could beat us one-on-one, so we need to close down their space and make sure we defend in threes.

"When I think back to two years ago when we met at Pittodrie in very non-Samoan conditions, it was 13-13 with a minute to go and we were fortunate to get a penalty and win the game.

"But we have belief in the way we are trying to play and the way we can react to different situations."

Lamont picked up a rib injury in the 9-6 win over Australia but recovered in time to take a place on the bench for the 37-25 success in Fiji.

"I think we need Sean's firepower," explained Robinson. "We're looking for him to step up and ball carry hard through the Samoan line.

"Chris has played a very good supporting role during the first two games and this start is a reward for those performances.

"Richie did well off the bench against Fiji and I'm delighted he now has a chance to stake a claim for the number eight jersey."