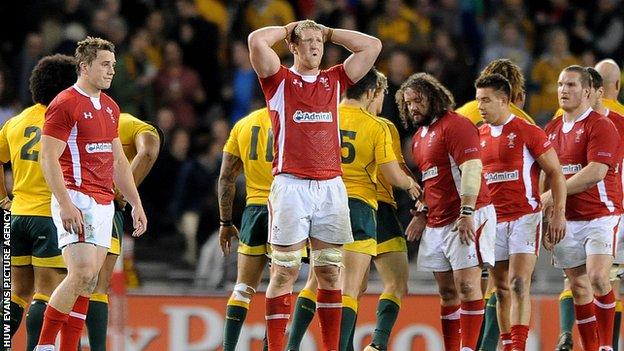 Wales want to follow the example of the 2009 British and Irish Lions to prevent a series whitewash in Australia.

The Lions went into their third and final Test in South Africa 2-0 down, but ended the series with a win.

After losing 25-23 to Australia in Melbourne on Saturday Wales are also 2-0 down going into the final Test.

"It's a similar scenario to the Lions in 2009 and we probably saved our best performance until the last game," said Wales defence coach Shaun Edwards.

"It's another game playing together, so hopefully there will be an improvement from our last performance and the best performance will be on Saturday.

"Maybe Australia will improve as well, but I'd like to think we would be even better on Saturday."

Edwards admitted the squad were mentally scarred by Saturday's clash, which saw Wallaby replacement Mike Harris's last gasp penalty give the Wallabies victory and an unassailable lead in the three-Test series.

"You can sense a obviously huge disappointment - an opportunity definitely missed," Edwards said.

"But hopefully as the week progresses that will slowly turn into a determination to not leave... without a victory in a Test match."

Edwards is happy that Wales' performances in Australia are showing signs of gradual improvement from the first Test, which they lost 27-19 in Brisbane.

"I thought defensively we were much more at the races on Saturday," he added.

"We defended for long periods - we didn't have a great deal of possession, but against a very, very formidable offence, and trust me one of the most sophisticated offences in world rugby, I thought we did a decent job in defence.

"We'd like to be a little bit more accurate probably with our line-out and we'd like to win the territory battle, which is something we have struggled [with] quite a bit against Australia in past encounters.

"Last weekend was a good example. I think they [Australia] had nearly five minutes in our 22 and we had one minute in their 22. In that minute we scored a pretty powerful try from George North.

"If we can get that field position for a sustained period of time it shows we can be quite dangerous."

Australia have made two changes for the final game, with full-back Kurtley Beale returning after injury and Sitaleki Timani starting at lock.

Wales will name their side on Thursday morning.