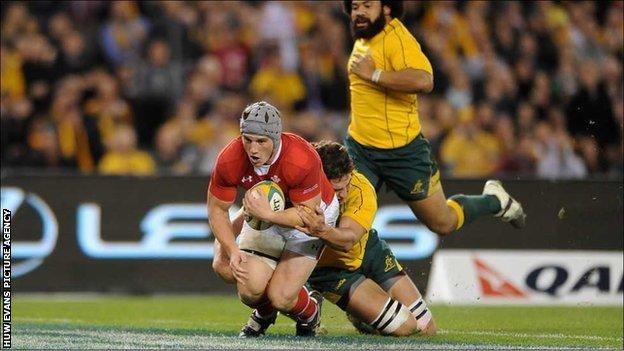 Jonathan Davies insists a victory in Australia is "vital" for Wales' development into world-beaters.

Wales play their final Test against the Wallabies in Sydney on Saturday hoping to celebrate their first win against them Down Under since 1969.

"What's vital for this team is how we react," the Scarlets centre said.

"We must react in a positive manner as we've got to finish the tour on a good note. It is very important we came down here and got a victory.

"Although the test series is lost now, I think for the development of this squad to the autumn we have to make sure we get a victory and ensure we keep focused."

Wales looked on course for victory over the Aussies at Etihad Stadium on Saturday as they led 23-22 going into added time.

But the 2012 Grand Slam champions were penalised by referee Chris Pollock for a collapsed maul and replacement fly-half Mike Harris kicked the reigning Tri-Nations champions to victory with the final play of the game.

Wales have beaten one of the Tri-Nations super-powers twice in their last 39 meetings, and face Argentina, New Zealand and Australia at the Millennium Stadium in their autumn Tests in November and December.

"We're getting closer," said Wales caretaker head coach Rob Howley, who has vowed to play his strongest team at the Aussie Stadium.

"This team has been to some dark places, particularly in the Rugby World Cup, and we'll move on.

"But our emotional intelligence and composure in critical areas in the game must get better."