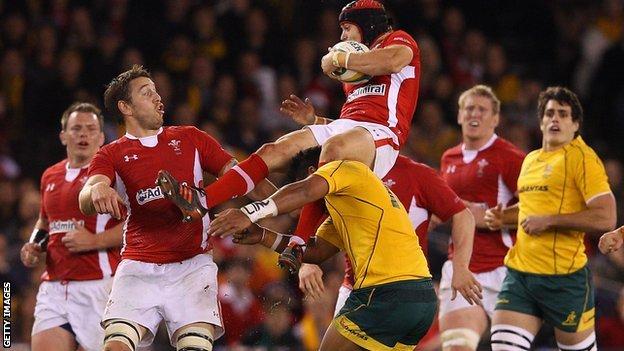 Australia wing Cooper Vuna is available for Saturday's final Test in Sydney despite being found guilty of a dangerous tackle on Leigh Halfpenny.

The 24-year-old wing was sin-binned in the 59th minute of the for challenging the Wales full-back in mid-air as Halfpenny leapt for a high kick.

Australia were reduced to 14 men and Halfpenny subsequently kicked the 40-yard penalty but Wales lost the game.

Vuna was later cited by the match commissioner for a "dangerous tackle."

But at a disciplinary hearing in Sydney, judicial officer Bruce Squire QC concluded there were "significant and compelling mitigating factors, including a lack of intent on Vuna's behalf, which did not warrant a suspension being imposed for the offence."

Vuna was cited on Saturday under Law 10.4(e) "dangerous tackling", and 10.4(i) "tackling the jumper in the air" but will be available for selection in the third Test in Syndey.

"There's a question whether it should have been a red card," said Wales' caretaker head coach Rob Howley after their Melbourne defeat. "But it was a yellow at least."