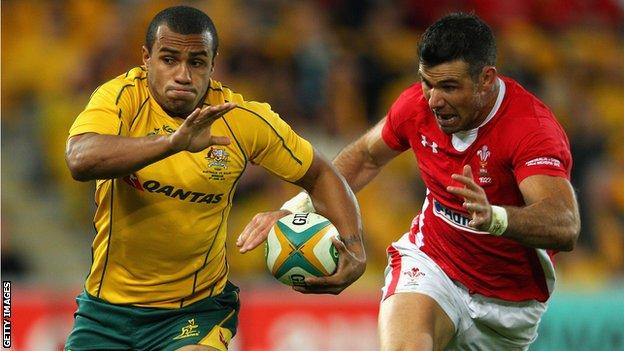 Captain Sam Warburton has warned Wales they have to stop Australia duo David Pocock and Will Genia in Saturday's must-win second Test in Melbourne.

The Wallabies beat Wales 27-19 in Brisbane last weekend and openside Pocock and scrum-half Genia were the stand-out performers.

"I think we need to be sharper to the ball carrier [at the ruck to stop Pocock]," said Warburton.

"We are going to have to be at our best defensively to keep him [Genia] quiet."

The impressive displays of man of the match Genia in attack and Pocock in defence helped the Wallabies open up a 20-6 lead during the first-half.

Although Wales launched a comeback, the home side held on to take a 1-0 lead in the three-Test series.

With Pocock ruling the ruck and the breakdown, Warburton believes Wales have to get more "streetwise" in order to nullify his opposite number.

Wales have announced a side showing four changes from the first Test with experienced trio Matthew Rees, Alun Wyn Jones and Ryan Jones all starting. The Wallabies have named an unchanged line-up.

"There were times when maybe we were not close enough in support [at the ruck] and it makes it very difficult when you are arriving when he [Pocock] is already locked in on the ball," assessed Warburton.

"So we need to get there a bit earlier and latch on a bit and take out their defensive players and try and form the ruck on our terms.

"Maybe we were a bit too honest at the break down. We could maybe have competed a bit harder. When it comes to releasing the player the interpretations down south can be slightly different from what they are up north.

"We have had a look at the tapes. It's looking at what you can get away with and what you can't really. I think we are trying to be a bit more streetwise.

"One of the secrets of possible success for Wales would be to keep Genia quiet going forward.

"Will Genia played great at the weekend. We never under-estimated these guys in the first place. That's not why they had good games, they are quality players.

"We are going to have to be at our best defensively to keep him quiet. He got man of the match was a great threat so we are going to make sure we tighten up our ruck defence.

"He brings players into the game so if we can negate him that's a lot of the Australian attack down the drain. So hopefully we can stop Australia at source."

Apart from the threat of the Wallabies, Warburton insisted Wales did not start the game as he had hoped.

"Whether the intensity took us by surprise I don't know," he added. "But we got together at half-time and came out for a much better second half.

"If we start a lot better this week it should stand us in good stead then going into the second half."