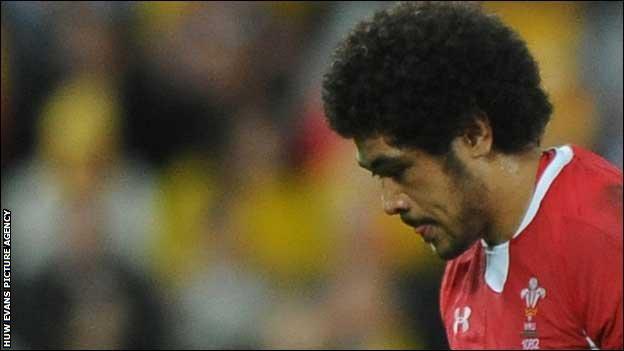 Toby Faletau has been ruled out of Wales' three-Test tour to Australia as the number eight suffered a broken bone in his hand in their .

The 21-year-old has been replaced in the 34-man squad by Melbourne Rebels' Gareth Delve, who won the last of his 11 caps against Ireland in March 2010.

Faletau was injured in a bruising 27-19 defeat in Brisbane where George North and Scott Williams also went off.

Wales' caretaker coach Rob Howley is hopeful that both North and Williams will be fit for Saturday's second Test in Melbourne.

North was replaced by James Hook after 31 minutes of Saturday's 27-19 Suncorp Stadium loss because of a dead leg and the Scarlets wing will be assessed by the Welsh medical staff.

Williams needed stitches to a mouth wound after a clash of heads with Australia hooker Tatafu Polota-Nau midway through the second half and the Scarlets centre was replaced by Ashley Beck.

Wales expect both North and Williams to recover as the 2012 Grand Slam winners hope to beat the Wallabies in Australia for the first time since 1969 at the Etihad Stadium on Saturday.

But Faletau, who has not missed a game for virtually 18 months and has already won 18 Wales caps since his international debut against the Barbarians in June 2011, is set to return to Wales and the Newport Gwent Dragons will hope he can be fit for the start of the Pro12 season in September.

The Rodney Parade side are already expected to be at the start of the season as the blind-side flanker will undergo surgery in an attempt to solve a persistent ankle problem.