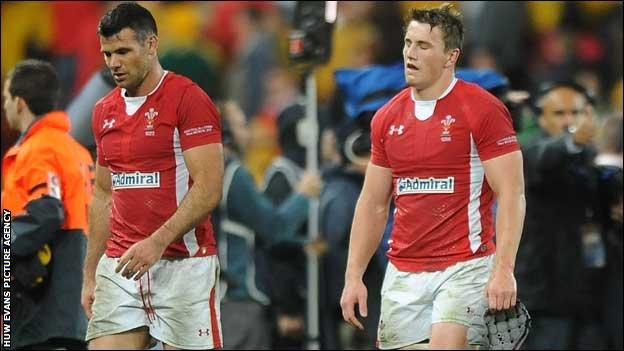 Rob Howley believes the Welsh wasted a "golden opportunity" to cause a shock in the southern hemisphere as Australia overpowered the Grand Slam champions.

Wales, who have beaten the Wallabies just once in Australia, were within a point of the Aussies in Brisbane before they regained control to

"Disappointed" Howley has warned his Wales side to be "more clinical" in Saturday's second Test in Melbourne.

"International rugby is about taking your opportunities," said Howley.

Scott Higginbotham and Will Genia scored tries to fire Australia into a 20-6 lead just before the hour.

But 13 unanswered points from Wales - as Alex Cuthbert scored and the boot of Leigh Halfpenny, who kicked 14 of the 19 Welsh points - dragged the Welsh to within a point in the Suncorp Stadium.

Caretaker coach Howley, though, highlighted an opportunity missed when Rhys Priestland spilled a high pass from Sam Warburton with men outside him.

Wales, who have only beaten a Tri-Nations super power twice in the southern hemisphere, had to settle for three points - as they had already been awarded a penalty, which Halfpenny kicked - when they should have had seven.

"It is about mastering skills under pressure and being clinical under pressure," said Howley, as Warren Gatland recovers from a fall before starting his British and Irish Lions coaching duties.

"We got back into the game at 20-19 and there were moments then when opportunities presented themselves we should have taken.

"We have lost a Test match which we had a golden opportunity to win. We are disappointed.

"We struggled with the intensity in the first half but we responded pretty well in the second half. We did create further opportunities and it could have been so different.

"We will be better for that hit-out. There will be some rest and recuperation before making sure we are mentally switched on.

"I think we showed signs in the second half in particular that when we kept the ball and went through some phases, we put the Aussies under pressure.

"We have to be more clinical next week."

Wales hardly troubled the Aussie defence in the first half and it was a Priestland error that ended one of their most promising attacks as the fly-half knocked on after some good work between him, Halfpenny and Scott Williams had manoeuvred the Welsh into opposition territory.

A late Cuthbert charge to the corner was also thwarted by a superb Higginbotham tackle, as Australia controlled their fifth successive win over Wales.

"The game was played at a great pace and to be brutally honest, we struggled to keep up with that in the first half," admitted Wales captain Warburton.

"The second half was better, but there are no excuses, it wasn't good enough in the first half."