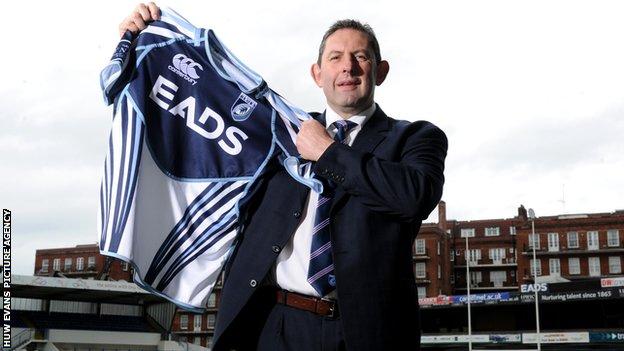 Reed, who made his Wales debut as a replacement against Scotland in the Six Nations, comes in as Paul Tito leaves and Deiniol Jones retires.

"I'm sure he will thrive at the Blues and add real quality to our squad," said Phil Davies, the new Blues director of rugby.

He was named in the 45-man Wales training squad for the 2011 Rugby World Cup in New Zealand.

The Treorchy man will join up with some familiar faces at the Blues, as he was one of three second row players that won the Junior Grand Slam with Wales in 2005, with the other two being Blues players Bradley Davies and James Down.

"Lou is a player I have previously worked with at the Scarlets," said Davies.

"He has developed greatly over the last few seasons and has added vast experience to his undoubted talent during this time and will be a valuable asset to our forward pack.

"I'm sure he will thrive at the Blues and add real quality to our squad."

Bourrust, who has played for Sale Sharks and Auch, is 26 and played 55 Top 14 games for the Catalan giants.

"Beniot has had good experience playing in French Top 14 and with Sale Sharks in England over the past three or four seasons and will certainly bolster our front row," said Davies.

"He is a player that the region have followed over the past 12 months and I look forward to working with him at the Blues."

Meanwhile, Davies' first home game in charge of the Blues will be against his former club, Worcester Warriors.

The former Warriors assistant coach was appointed as the Blues director of rugby last month.

The game will be their first match back at the Arms Park on Saturday, 11 August.

The Cardiff Blues board agreed to move from the Cardiff City Stadium back to their old ground for the 2012-13 season and foreseeable future.

The Blues faced Worcester in a pre-season friendly in back August 2006 at the Arms Park, when they won 41-19.