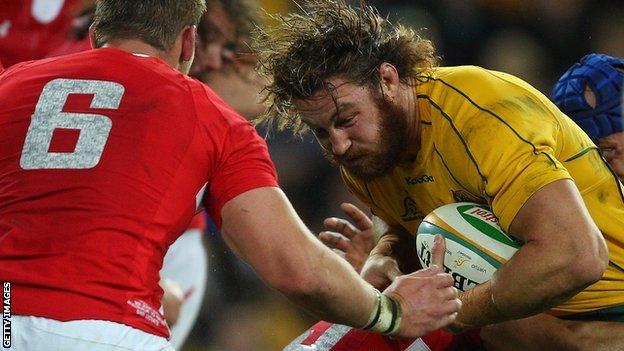 Australia held off a spirited Wales fightback to overcome the sluggish Six Nations champions in Brisbane.

The Wallabies responded to their shock defeat by Scotland with trademark determination as the Grand Slam winners suffered their first loss of 2012.

Tries from Scott Higginbotham and Will Genia helped the Aussies to a 20-6 lead but Alex Cuthbert's try and two Leigh Halfpenny penalties made it 20-19.

Wales had further chances before and after McCabe's try but lacked the necessary precision to secure a first win over the Wallabies in Australia since 1969.

A added to their woes as both were forced off at the Suncorp Stadium.

Wales' pre-match optimism was quickly brought into sharp focus as the hosts raced into a 10-0 lead inside 16 minutes.

Wales, notorious slow starters, manufactured an early sight of the Aussie line as Rhys Priestland put Halfpenny through a gap in midfield before the fly-half took the return pass.

Priestland fed Williams, in for the injured Jamie Roberts, but he was hauled down and the chance went when Priestland knocked on.

Australia also squandered a seemingly certain try when Rob Horne, with Adam Ashley-Cooper unmarked outside him, kept the ball too long and Cuthbert's last-ditch tackle rescued the Welsh.

But the reprieve proved short-lived as two minutes later flanker Higginbotham, benefiting from quick ball from the base of a ruck, barged through the visiting defence to score his first international try.

Barnes was clinical with the conversion as the Welsh felt the backlash from Australia after their shock defeat by Scotland on Tuesday.

Halfpenny gave the visitors a toehold in the game in the 23rd minute as he shrugged off the boos to land a penalty.

But they were not helped when the dangerous North, who had shown flashes of the brilliance that lit up the 2011 Rugby World Cup, hobbled off with a knee injury.

The Wallabies enjoyed a perfect start to the second half as their outstanding scrum-half Genia extended the lead with a stunning solo effort.

Genia sped between Adam Jones and Ken Owens, selling the latter a lovely dummy, and the 24-year-old danced around James Hook - who had come on for North, with Halfpenny switching to wing - to score his seventh international try.

A Halfpenny penalty kept Wales in the contest before Barnes, benefiting from Genia's work-rate, showed composure to clip over a drop-goal.

Wales, already trailing by 14 points, suffered another injury blow as Williams departed after a heavy collision with Tatafu Polota-Nau.

But Halfpenny slotted over a penalty to make it 20-9 before replacement Ashley Beck set up a try that gave Wales hope of a famous victory.

The Ospreys centre punched a hole in the Aussie defence but as he went to ground, popped up a pass for giant Blues wing Cuthbert to charge onto and touch down for his fourth try in seven Tests.

Halfpenny added the conversion and then knocked over a penalty in the 62nd minute to bring the tourists to within a point.

But Wales should have been celebrating another seven points rather than just three, with Priestland spilling a high pass from Sam Warburton with men outside him.

The sense of a vital chance missed was emphasised five minutes later as McCabe showed Australia's clinical side to end Wales' resistance.

Genia was again the architect as he shuffled across the field near Wales' 22 to feed the centre, whose line break bisected Beck and Mike Phillips for a try Barnes improved.

Wales, needing two scores, squandered a late chance as James Hook reclaimed his high kick after Will Genia's spill, but Cuthbert's charge to the corner was halted by a superb Higginbotham tackle.

Barnes smashed a second penalty against the upright late on, but Australia had done enough to extend their winning sequence over Wales to five Tests.