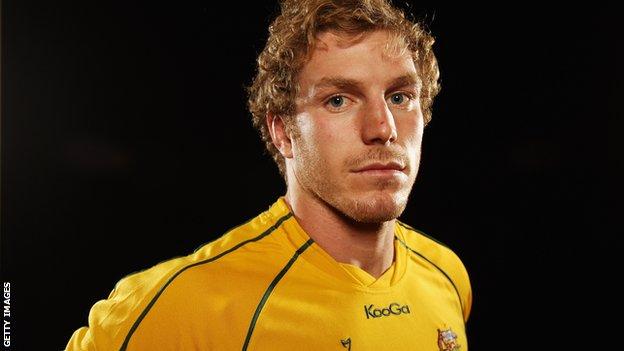 David Pocock has warned Wales to expect a backlash from Australia when the two sides meet in Brisbane on Saturday.

The Wallabies suffered a shock 9-6 defeat to Scotland on Tuesday, albeit in atrocious weather conditions.

"It was definitely not the start we were after for the Test season," said Pocock, who captained Australia against the Scots.

"We go into Saturday after the loss knowing we have no option but to perform against Wales."

Scotland were on a seven-match losing streak before facing Australia, who face Wales in the Suncorp Stadium.

Robbie Deans, the Australia coach, paid the price for his selection of a new-look Wallaby side to face the Scots, but has made eight changes in personnel to select his strongest available line-up for the first of a three-match Test series against the Welsh.

Australia will be without the "Three Amigos" of talented backs Kurtley Beale, James O'Connor and Quade Cooper, as well as lock and skipper James Horwill due to injury for the series, which also includes Tests in Melbourne and Sydney.

Grand Slam champions Wales have not beaten Australia on Aussie soil since 1969 and their last victory over the Wallabies was in Cardiff back in 2008.

Wales may have lost the last four games between the two countries, but Pocock is more than aware of the threat posed by their rival 2011 World Cup third-fourth place play-off opponents.

"They are Six Nations champions," said Pocock. "Their attack is probably one of the best in the world in the way they use the ball.

"They have big guys in the backline, their centres create a bit of havoc and their wingers run really good lines.

"Defensively is one of the areas, over the last three or so years, they have really improved."

Pocock acknowledged the importance of a victory in the first Test but dismissed the idea that it was the be-all and end-all for the Test series.

"It is important because you win the first one, then you only have to win another one," said Pocock.

"But like any three-Test series the first one is important but it's not the end of it. You have three games."

Wales arrived in Australia determined to end their 25-year southern hemisphere hoodoo against the Wallabies.

They have not taken a major scalp in the southern hemisphere since beating Australia at the 1987 World Cup.