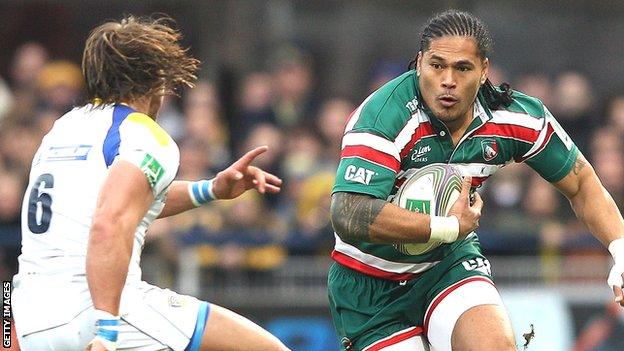 Leicester winger Alesana Tuilagi has said leaving the Tigers, and his younger brother Manu, at the end of the season will be an emotional occasion.

After eight years at Welford Road Alesana is moving to Japan in May to finish his career.

It's not just about leaving Manu. I've known a few of the boys for a long time.

"Making the decision was really tough, but it's a good opportunity for me and my family."

Alesana is one of five Tuilagi brothers, also including Andy, Freddie and Henry, to play for the Tigers and he will leave England international Manu as the only family member in the squad.

"I've been here ages," Alesana added. "I'm used to the area and the club, and I feel comfortable playing at Welford Road".

The 31-year-old, who has been capped 26 times by Samoa, enjoyed his best Tigers campaign last season when he finished as the Premiership's top try-scorer with 17 - including a hat-trick against Gloucester.

"I've been thinking about my final game for a long time," he said. "And it's not just about leaving Manu. I've known a few of the boys for a long time."

"We've been playing together and having fun together for a while, so it's very sad."

Tuilagi's final game at Welford Road, providing Leicester do not secure a home play-off semi-final in the Premiership, will come against old rivals Bath on Saturday, 5 May.