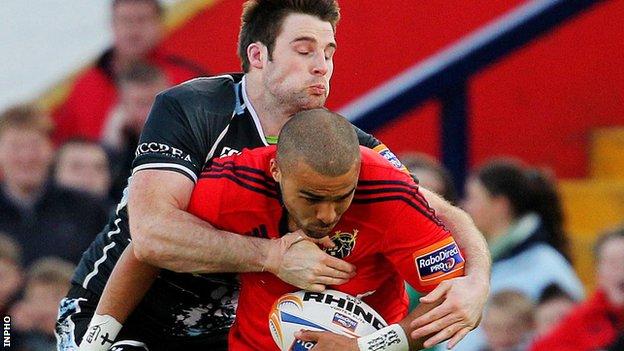 Tries from Luke O'Dea and Peter O'Mahony helped the holders lead 18-6 at half-time at Musgrave Park.

Two superb tries from Stuart Hogg in a five-minute spell got Glasgow to within five points of the home side.

Jackson booted the Warriors ahead with a 10th-minute penalty as Munster, in the wake of last weekend's Heineken Cup exit, made a slow start.

However, Keatley levelled in the 19th minute and as Munster picked up the pace, good work by Donncha O'Callaghan set up O'Dea's try.

Obstruction from Wian du Preez, straight from the restart, allowed Jackson to double his kicking tally but Keatley quickly responded in kind before man of the match O'Mahony notched Munster's second try in first-half injury-time.

The Ireland back rower did brilliantly to scramble over despite the presence of three Glasgow defenders close to their line, with Keatley adding the conversion.

The Scots needed to show more urgency on the resumption and they did just that with speedster Hogg spearheading a counter-attack over halfway and then burning off two defenders for a fine score in the corner.

The gap remained five points but the 64th minute after Keatley's six further points had been cancelled out by Jackson and Weir penalties.

Keatley replied with a penalty but a neat one-two between Hogg and Colin Shaw unlocked the Munster defence again as the centre scampered through for a second touchdown to cut the margin to five points.

The gap was still five points by the 64th minute after Keatley's six further points had been cancelled out by Jackson and Weir penalties.

However, Munster were finally able to get some breathing space after Glasgow winger Federico Aramburu was sin-binned for not rolling away.

Keatley sent the resulting penalty through the uprights and then replacement Murray dotted down in the left corner after Lifeimi Mafi's skilful offload had released Simon Zebo.

The victory was within Munster's grasp although a midfield mistake gifted a third try to Hogg with Weir's simple conversion ensuring Glasgow's losing bonus point.