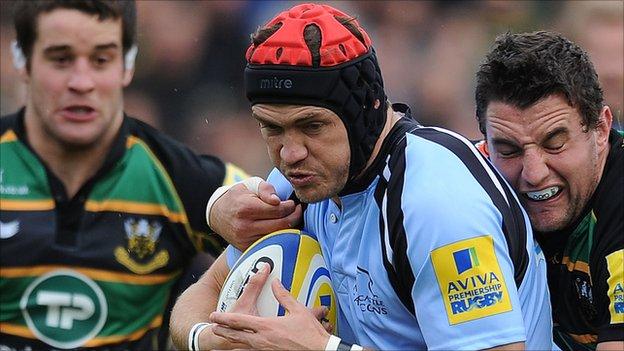 Newcastle Falcons centre Corne Uys has said there is no point in worrying about external factors in their battle to remain in the Premiership.

"We've been focusing on what we can control," Uys told BBC Newcastle.

"The only thing we can control is to put in quality performances every day, give our all and hope for the best."

He continued: "At the end of the day, when the season has finished we won't think if this team did this and this team did that we could have stayed up, we're taking the onus on ourselves, and responsibility for our own performances.

"If we don't win our last three games then we only have ourselves to blame."

Regardless of on-field outcomes, Newcastle's hopes of avoiding the drop could be boosted by Wasps' potential administration or the possible ineligibility of the promoted Championship clubs to play in the Premiership.

"The main goal at the beginning of next season is to stay in the Premiership," Uys added.

"If that is because of other team's misfortune or whatever, it's our main goal.

"We'll do whatever we can, if something comes along and helps us, great, but if not we're taking the responsibility ourselves."