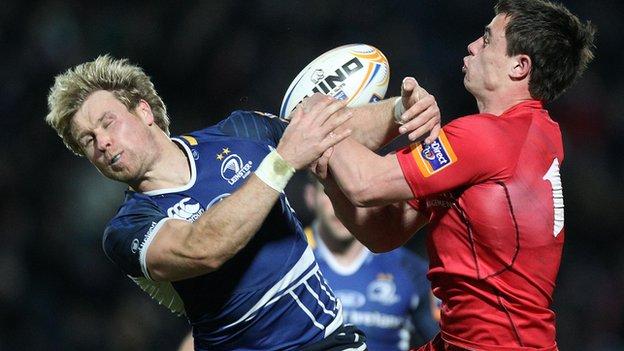 Leinster scored eight tries against Edinburgh at the RDS to secure a home semi-final in the RaboDirect Pro12.

Shane Jennings went over for the leaders but it was cancelled out by Nick De Luca's try before Fergus McFadden and Sean Cronin touched down.

Leinster led 18-7 at the break and surged clear in the second half.

The game burst into life with a number of players looking to press their claims for more regular game-time, and the sight of Toner galloping into the Edinburgh 22 delighted the home support.

McFadden watched a penalty attempt flick away off the left post, but covering winger Lee Jones failed to control the difficult bouncing ball and Jennings swept in to ground it for the opening try.

McFadden failed to add the conversion and Edinburgh initiated an immediate response, piling through the middle before Greig Laidlaw's pass sent De Luca over for a well-worked try.

The right-sided conversion was landed by Laidlaw to move the Scots 7-5 ahead, but their lead was a brief one as Leinster hit back with a stunning second touchdown.

Countering from deep, Nacewa sent David Kearney surging down the right wing and his inside pass was perfectly timed for McFadden to gather and complete a 40-metre dash to the corner.

But the centre's place-kicking woes continued with a missed conversion and a penalty attempt that went wide at the midpoint of the half.

Edinburgh defended well until Kyle Traynor infringed at a 29th-minute scrum and McFadden was back on target from the resulting kick, splitting the posts from the left.

Edinburgh conceded a try early in the second half as Ian Madigan's clever kick to the left was gobbled up by Carr and the conversion was supplied by Nacewa.

Two penalties from Laidlaw kept Michael Bradley's men in touch at 25-13 down, however the hosts bossed the final quarter.

A Nacewa penalty put 15 points between the sides and then the full-back burst on to a Boss pass to grab try number five which he converted himself.

A powerful lineout maul saw replacement Auva'a crash over for the sixth, and a scintillating length of the field break, sparked by man-of-the-match Madigan, put Macken over in the same right corner.

The icing on the cake for Joe Schmidt's charges was a last-minute try for giant lock Toner, who darted through a gap and muscled over past the final two defenders.