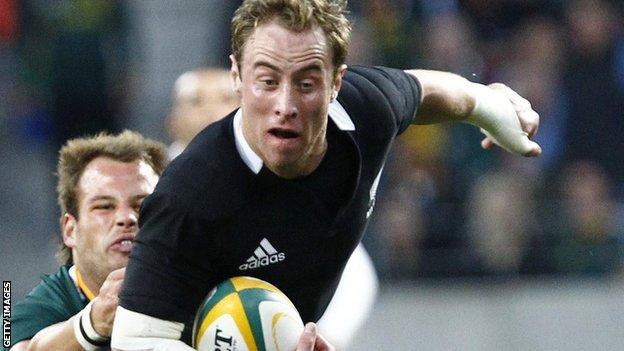 The 30-year-old has been with Super 15 side Highlanders since 2003 but has struggled to secure a starting place this year.

Capped 51 times for the All Blacks, Cowan was third-choice scrum-half behind Piri Weepu and Andy Ellis at the 2011 World Cup and played four games.

He becomes the sixth new player to commit to Gloucester for next term's Premiership campaign.

Cowan's arrival will further bolster Gloucester's ranks, with the side set to lose captain Luke Narraway, Scott Lawson and Alasdair Strokosch after all three confirmed they would be leaving the club.

And with the futures of fellow scrum-halves Rory Lawson and Nick Runciman not yet secure, Cowan could bring much-needed experience to a new-look Cherry and Whites line-up.

Born in Gore, Cowan started his career with Southland before being called up for the Highlanders, making his debut in 2003, and going on to become one of only two players to make 100 appearances for the club.

But he has fallen down the pecking order this season and with his New Zealand Rugby Union contract set to expire this year, he has opted to make his move to the Premiership.