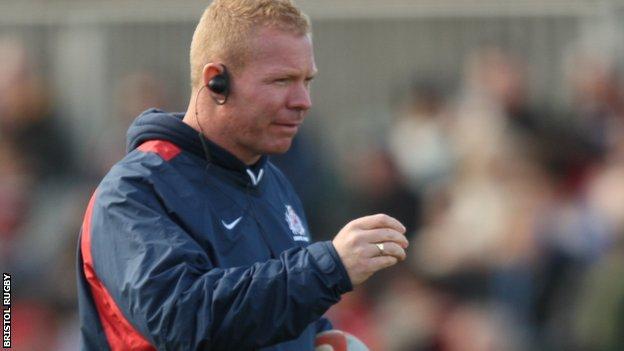 Head coach Liam Middleton believes Bristol have not yet reached their full potential, despite their unbeaten record in the Championship play-offs.

Second-place Bristol play their penultimate Pool A game against leaders London Welsh on Sunday, knowing a win will secure them a semi-final place.

"We think we've been operating at about 60%," Middleton told BBC Radio Bristol.

POOL A: As It Stands

He continued: "In our last few games, by our standards, we've performed averagely. We're not concerned by that because we know we can raise it.

"But even performing averagely we haven't lost yet."

Bristol finished top of the Championship in the regular season - 14 points above Welsh - but Sunday's opponents lead the play-off chase.

However, Middleton insists he is not focused on their position in the table.

"We'll continue to take one game at a time," added Middleton.

"If that allows us to finish top then great but if you finish second - at this point of the season - you still have to be able to beat all the teams involved.

"For us there's no real preference. We just want to do what we've done throughout the league season, which is play what's in front of us and try and beat them."

Their last meeting finished 12-12 but Middleton is bullish on their chances of overcoming Welsh to steal top spot.

"Playing there is no fear for us. In general, I think we have better supporters at their ground than they have," he added.

"London Welsh have been inconsistent but they certainly raise their game for us.

"The boys are very confident at the moment and I think that will show in the game."