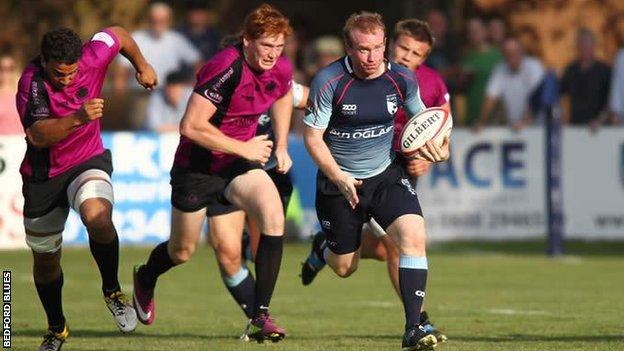 Bedford boss Mike Rayer has suggested play-off rivals Bristol will have to brush off the pressure if they are to win promotion to the Premiership.

The Blues, currently top of Pool B, would meet Bristol in the final four as things stand.

"They potentially could be the only ones in the semi-finals that can actually achieve Premiership status," Rayer told BBC Three Counties Radio.

"It's probably weighing on their minds, it's a heavy burden to carry."

He added: "Potentially the other three will have nothing to lose.

"But that's a few weeks off yet, we won't worry too much about what others are doing.

"I'll worry about getting us right and ready and firing on all cylinders because I think we're only playing to 70% of our potential at the moment.

"Bristol have been favourites given their form and rightly so, they were outstanding through the course of stage one."

Rayer's men will secure top spot in their pool if they can overcome Cornish Pirates this weekend.

The south-west club, who were narrowly beaten by a late try at Goldington Road four weeks ago, will be given the added incentive of playing in front of their departing coach Chris Stirling for the final time.

"Like it needed any more edge after the game at home here," said former Wales international Rayer.

"I'm sure it will be an emotional occasion for Chris. I have a lot of respect for the guy.

"We've enjoyed our battles against each other and shared a beer after most of the games and we wish him well.

"I think he's done a terrific job at Cornish Pirates and he's going into a fantastic job in New Zealand but perhaps we can spoil his leaving party."