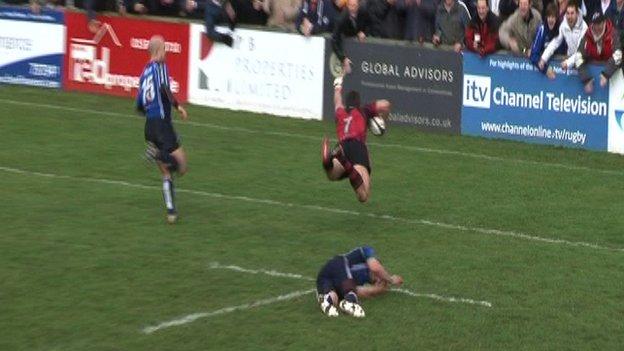 Jersey edged closer to promotion to the Championship with a 39-0 win over Macclesfield.

The Islanders ran in six tries, including a Guy Thompson hat-trick, to leave themselves just one win away from clinching the National One title.

A Nick Trower try put them ahead before Thompson's touch downs and tries from James Copsey and Jim Brownrigg.

Macclesfield went close with two penalties but could not breach the Jersey defence.

These lads have impressed everybody week in, week out and made everyone very proud

"I thought we battled and battled against a very good Macclesfield side," said Jersey's director of rugby Ben Harvey.

"As the game went on and we got a bit of ball we ended up scoring some pretty good tries.

"These lads have impressed everybody week in, week out and made everyone very proud."

It was the second consecutive match in which the Islanders had stopped their opposition from scoring.

They remain six points clear at the top of the league with two games to go.

Macclesfield boss Geoff Wappett told BBC Radio Jersey: "For the large part of the first half we had a large portion of the game.

"Turning around at 10-0 that wasn't too big a hurdle, but we constantly made too many errors around that midfield area."

Macclesfield stay sixth in the table, while leaders Jersey will seal a third promotion in a row if they can beat Coventry at the Butts Park Arena in the penultimate game of the season next Saturday.

Even a defeat might be enough if second-placed Ealing also lose at Fylde on the same afternoon.