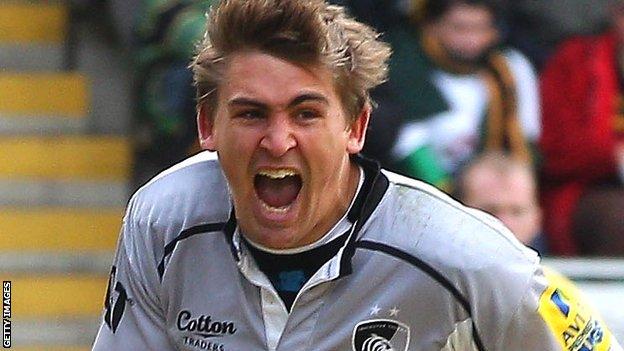 Toby Flood scored two tries and kicked 15 points as Leicester won the east Midlands derby at Northampton to go second in the Premiership.

Two Ryan Lamb penalties gave the hosts the lead but Tigers hit back with tries from Flood and Alesana Tuilagi.

Leicester were in the faces of Northampton all the time and there was some good rugby. It was a great performance from the Tigers. I thought it would be a much closer game

Leicester move above champions Saracens into second and are in pole position to claim a home semi-final.

The Tigers also became the first side to win at Franklin's Gardens since London Irish's 14-13 victory back in September.

Leicester had been dealt a blow before kick-off with influential captain Geordan Murphy ruled out with an eye injury, Scott Hamilton taking his place.

Northampton did most of the running in the early stages and led after five minutes thanks to Lamb's penalty.

The hosts were forcing Leicester into mistakes, with the visitors scrappy in their own 22, and Lamb kicked his second penalty, but it was his error which led to the first try of the game.

Lamb's kick from the restart was charged down by Leicester centre Anthony Allen and Flood raced clear to score under the posts, and then calmly kicked the extras to give Leicester a one-point lead.

From then on it was all Leicester and within four minutes Tigers had scored again, Agulla collecting his own chip before feeding Alesana Tuilagi on the inside to go over, with Flood again successful with the conversion.

After a relative period of calm, Flood and Lamb exchanged penalties as Leicester led 17-9 at half-time.

The Tigers had a great start to the second half as Flood evaded two tackles to go over for his second try, before adding the extras for a third time.

Lamb missed a chance to close the gap with his first unsuccessful kick of the afternoon, while at the other end, Flood made no mistake to open up at 27-9 lead.

Leicester scored a fourth try and secured a bonus point as Agulla went over in the right-hand corner, with Flood missing his first kick of the afternoon.

Dickson drove over through a crowd to score Northampton's first try four minutes later and replacement fly-half Stephen Myler's conversion went in off the right post.

Flood then kicked another successful penalty, before replacement Tigers prop Martin Castrogiovanni was shown a yellow card for a professional foul.

Ashton latched on to a kick-through by Myler to score Northampton's second try in the far right-hand corner, but it was too little too late.

"It doesn't feel too good. It was frustrating. Two quick tries from them and the wheels came off.

"We didn't defend very well. It's been good all season but today it was second best.

"We started really well and then our game went to pieces a little bit. We have got to make sure we don't let it destroy our season"