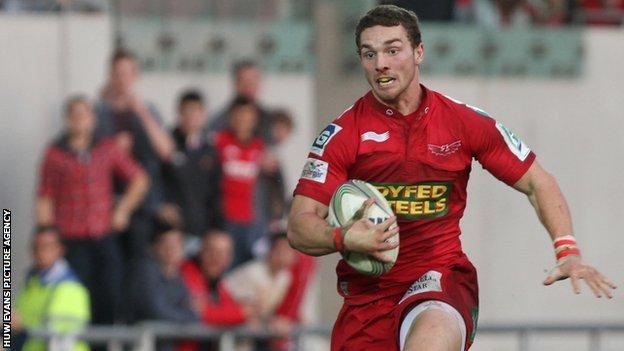 The 19-year-old was part of Wales' Grand Slam-winning team and has already won 21 caps but Davies is concerned that the Welsh rugby public have already put North on a pedestal.

"He said he goes around the supermarket and people are looking at what food he puts into his basket," said Davies.

"That is the type of intensity and glare he is under."

He added: "We have to be very careful with someone like George North. He is a 19-year-old boy.

Let's just realise the boy he is 19. He has had huge profile and very few people will know what that's like

"He is going to play some great rugby and he's going to be off the pace at times. We shouldn't put too much expectation on him."

North, who made his Wales debut in 2010, is considered a certainty for the British and Irish Lions squad for the tour of Australia in 2013.

And Davies is wary too much is expected of the youngster.

"I've sat him down today [Thursday] and said: 'I don't expect anything from you other than go out there and enjoy yourself. Don't put any pressure on yourself to do magical things out there. Just enjoy.'

"He's got a long way to go. We have got some great backs and what I'm trying to do is take some pressure off them."

"It's a problem. Let's just realise the boy he is 19. He has had huge profile and very few people will know what that's like.

"I have said to him 'don't expect to score a try every time you have got the ball and neither should anyone else'.

"He will get better than he is. He will have some down times.

"We don't want to over-use George. He is good on the ball, but he can be good as a decoy runner."

North will be in the Scarlets line-up for their Amlin Challenge Cup quarter-final clash against Brive at Stade Amédée-Domenech on Sunday.

As well as North, England number eight Ben Morgan has recovered from a hamstring, but Wales centre Scott Williams (shoulder) and Aaron Shingler (toe) have been ruled out, while outside-half Rhys Priestland (knee) is a doubt.

Brive, ninth in the French Top 14 after a 14-9 win over Toulon last weekend, will be without full-back Julien Caminati who has been suspended after failing a drug test.

If the Scarlets win they will take on Biarritz or Wasps away in the semi-finals at the end of April, with the match to be played at a neutral venue in the home country of the winning team.