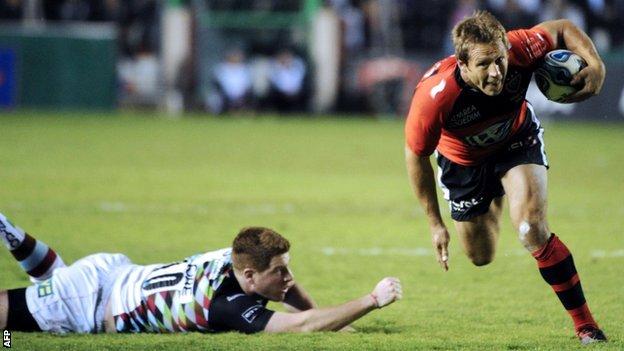 Jonny Wilkinson landed five penalties inside the first half hour in France as Toulon dumped holders Harlequins out of the Challenge Cup.

Rory Clegg kicked one penalty for Quins in a first half dominated by the boot.

The visitors' only try came from Danny Care with a late consolation.

The out-of-favour England scrum-half slipped through two tackles having taken a quick tap penalty after 77 minutes, but it was far too little too late for the Premiership leaders.

Harlequins' hopes of becoming the first side to retain the Challenge Cup came to a disappointing end with defeat at the feet of a Wilkinson-inspired Toulon, the former England fly-half kicking 17 points in a faultless display with the boot, before being replaced early in the second period.

The Aviva Premiership leaders headed to France without injured England skipper Chris Robshaw and star fly-half Nick Evans but coach Conor O'Shea believes his young players will learn a lot from their experience as they target domestic glory.

"When you give away three, six, nine, 12, 15 points in the first 20 minutes, it's the game done. We talked about discipline and we talked about Jonny before the game.

"We spoke about getting an early score ourselves because that's what you need when you come to places like this but we gave penalties away when we had possession. We had two lineouts to try and build our own momentum but we coughed them up and we lost the battle around the contact area against a very physical team.

"We're disappointed to lose a trophy that we worked incredibly hard to win but we know what we're focussed on and we'll concentrate on Wasps next week. But we just came up against a very good side. Toulon don't lose here very often and they were very much at full strength.

"And I've got to credit some of our younger guys for keeping going until the bitter end. We had people like Will Collier at just 21 coming on at tight-head, Rob Buchanan at 20 had 50 minutes at hooker in that sort of atmosphere against Sebastien Bruno and it was also part of Rory Clegg's continued development."