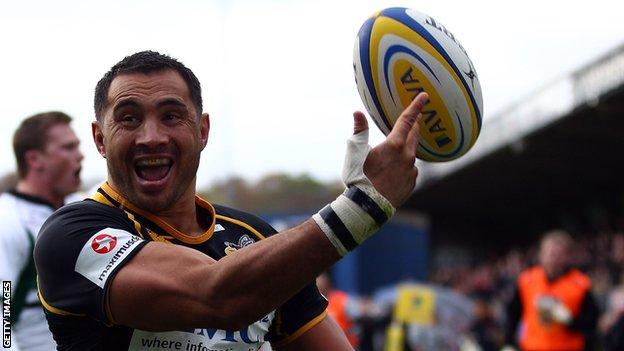 England centre Riki Flutey is to quit Wasps at the end of the season to return to his native New Zealand.

The 32-year-old is likely to have played his last game for the London club, as he is braced to miss the rest of the campaign with an ankle injury.

Flutey is also expected to pursue a career in Japanese rugby.

"My wife and my three kids will first be returning to New Zealand and she is expecting our fourth child this summer," he told the Wasps website.

"I really just want to take this chance to say a massive thanks to Wasps for being so supportive and understanding of what has been a tough decision to leave, but ultimately having four young kids away from family and a support network in New Zealand would be very tough.

"It goes without saying that the club will always have a huge place in my heart."

The former Hurricanes and London Irish man represented New Zealand Maori and New Zealand Under-19s before making his first of 14 England Test appearances in 2008, after taking advantage of the three-year residency rule.

He was selected for the 2009 British and Irish Lions tour to South Africa where he became the first player to play against [on the 2005 tour in New Zealand] and then for the Lions before featuring in the third and final Test.

He is in his second spell at Adams Park, after joining initially in 2007 before returning in 2010 after a season at Brive, taking in a total of 81 games and 68 points.

"We are sorry to lose Riki next year but family comes first and we understand how hard a decision it was to make," said director of rugby Dai Young.

"I'd like to thank him for his contribution in his time with the club and wish him all the best in the future."