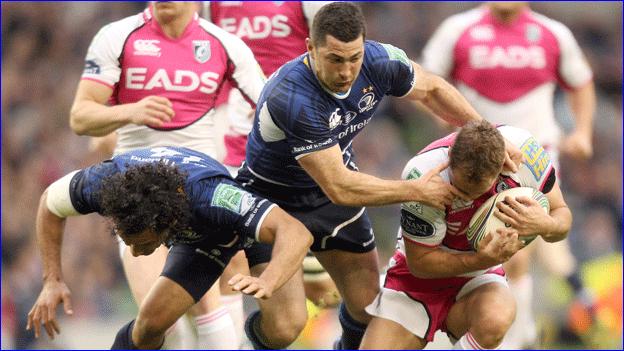 Leinster marched into the Heineken Cup semi-finals with a thumping win over Cardiff Blues at the Aviva Stadium.

Leinster's unbeaten record in the competition now lies at 13 matches.

The Irish province will travel to face either Saracens or Clermont Auvergne in the last four.

Blues scored the first points of the game in the second minute when Halfpenny kicked a penalty after Gordon D'Arcy was penalised for not releasing the ball.

Six minutes later Halfpenny was pulled up for a similar offence and Sexton knocked over the resulting penalty to level the scores.

Nacewa went over the Blues line for the champions' opening try in the 12th minute.

Sexton launched the attack by finding a gap in the visitors' defence, running clear, dummying and then passing to Kearney, who fed for Nacewa to run over in the corner.

Sexton added the conversion to give the Irish province a seven-point lead.

The Ireland fly-half missed with his next penalty attempt, but was successful with a further effort in the 23rd minute.

Leinster's second try came on 29 minutes when Kearney touched down under the posts.

Lively scrum-half Eoin Reddan made the break, but he was tackled by Halfpenny as he bore down on the line.

O'Driscoll crossed the line in the 34th minute as his side continued to dominate the game.

Leinster secured possession from a lineout and a flowing move saw Sexton offload to Luke Fitzgerald, who then fed O'Driscoll, who ran in under the posts.

Sexton's third conversion saw the home side enjoy a deserved 24-point advantage at the interval.

Blues began the second half brightly but were rocked by Kearney's second try of the game in the 46th minute.

The backs played out a fine passing move, the forwards played their part and then O'Driscoll set up Kearney, who dived over, Sexton converting.

The Welsh side kept battling and Martyn Williams was denied a try when the Television Match Official ruled that he had not grounded the ball over the line.

Wing Tom James was sin-binned after infringing as Leinster tried to increase their try count in the closing minutes.