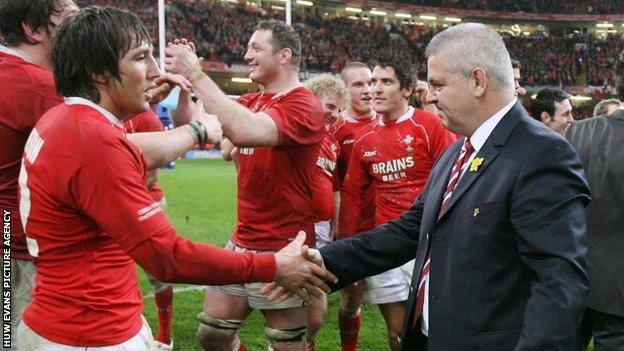 Former Wales captain Gwyn Jones believes Gavin Henson may have "blown" his attempt at rekindling his career because of an in-flight incident.

Henson has apologised for "inexcusable" alcohol-fuelled behaviour on a post-match weekend flight.

That led to his immediate suspension by Cardiff Blues whose board could decide on Monday whether to end his contract or let him see the season out.

Jones told BBC Wales' Scrum V: "I think he may well have blown it."

The Blues face Leinster in Dublin in a Heineken Cup quarter-final on Saturday fearing another Wales and British and Irish Lion centre, Jamie Roberts, may not be fit.

Two Grand Slams and a British Lion and yet we still feel a huge sense of under-fulfilment, of potential gone wasted

Roberts injured a knee in the Blues' 31-3 defeat by Glasgow on Friday night. The following morning, Henson behaved in a manner that prompted Sunday's statement of apology.

Henson joined the Blues on an eight-month contract in October and former Wales flanker Jones believes Henson may see out the season with the Blues, but not remain there after that.

Namesake Robert, the former Wales and British and Irish Lions scrum-half has been disappointed by Henson's on-field performances in stints at Saracens, Toulon and the Blues since his controversial 2010 departure from the Ospreys.

"Two Grand Slams and a British Lion and yet we still feel a huge sense of under-fulfilment, of potential gone wasted, especially over the last four years.

"For only a few periods in his career has he been the player we know that he can be and everyone has tried to get him back involved."

The ex-Llanelli and Cardiff flanker is unsurprised Henson has once more been the subject of unsavoury headlines.

"It's no surprise that we're talking about Henson and it's got nothing to do with rugby," said Gwyn Jones.

"It's clear that he can't handle alcohol, he becomes a different person.

"And everyone's tried giving him an opportunity.

"[Wales coach Warren] Gatland and the Blues have been trying.

"But I think it's [about] a combination of whether he can't handle being a fringe player and the attention isn't on him or whether he's got the commitment for the game any longer, I don't know.

"Because he realises, it's the end of the season, everyone's out of contract.

"You're looking for your next job - you should be doing everything you can to secure a future.

"But I don't know if the appetite is there for him any more.

"And who's going to sign this guy who's 30, who hasn't played well for four years and he's going to come with a whole load of baggage?"

Robert Jones was equally pessimistic about Henson's chances of securing a rugby future if the Blues let him go.

"I can't see anyone else coming in and wanting to have a Gavin Henson on their books," said the ex-Swansea, Cardiff and Bristol player.