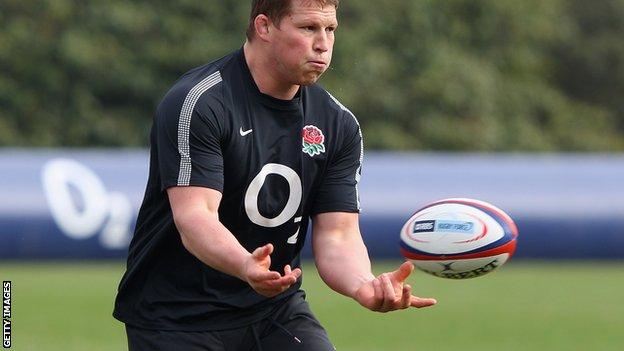 The panel which banned Dylan Hartley for biting an opponent was told he "might soon" be made England captain by national forwards coach Graham Rowntree.

Details of the comments emerged after the written judgement was published.

Rowntree told the board Hartley was "very close to having been made captain and might well soon become captain".

It is not known whether the England coaching team's opinion remains the same after Hartley, 26, was banned.

He was suspended until 14 May following the incident during England's 30-9 Six Nations victory last month.

Hartley could have faced a much lengthier penalty given he was suspended for six months in 2007 for eye-gouging Wasps players Jonny O'Connor and James Haskell in the same match.

But the panel decided to "ignore" the gouging incident - and they reduced the ban from a potential 12 weeks - following "glowing" character references from Rowntree and Northampton director of rugby Jim Mallinder.

Dylan Hartley scored a Test try only three minutes after stepping off the bench when winning his 20th cap, against New Zealand at Twickenham in November 2010

Rowntree insisted on attending the hearing to speak on Hartley's behalf and detailed the "massive change" he has seen in the player since his "struggle in 2007".

The full written judgement details Rowntree describing Hartley as "a beacon and a leader" during England's recent troubled times and he added "no-one had more credibility with his peers".

Harlequins flanker Chris Robshaw was made England skipper for the Six Nations, but Rowntree said Hartley "was very close to having been made captain of the national team and might well soon become captain".

The panel accepted Rowntree and Mallinder's plea for them to recognise Hartley as being "very different from the man who committed the offence in 2007".

"The easy course for the committee to follow was to ignore what they had heard and take the player's previous suspension into account," the 13-page report, signed by chairman Roger Morris, says.

"However to do that would have been to rely on the anecdotal baggage surrounding the player and not on the facts before them.

"It would also fail to acknowledge that the purpose of sanction is also to cause an offender to think again about his behaviour and that, the committee felt compelled to conclude, was what the player had done."